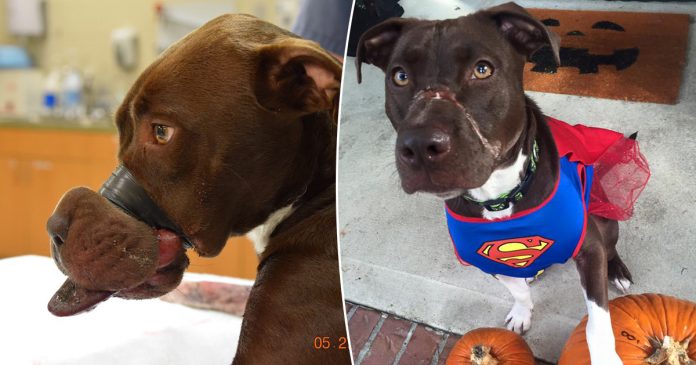 Chocolate brown bull terrier-mix Caitlyn looks just like any other bull terriers that are well taken care of; friendly, charming and healthy but that is only after she was rescued after a horrific abuse.

On May 27, 2015, a viral image of Caitlyn’s swollen muzzle bound by electrical tape shocked the world. Apparently, Caitlyn’s former owner taped her muzzle to stop her from barking.

The tape was wrapped around her mouth so tight that the rescuers predicted that she had endured the torture for up to 48 hours without drinking and eating.

Luckily, the dog was later rescued by Charleston Animal Society which later took her in. Caitlyn had to undergo a jaw reconstruction surgery but luckily, Dr. Henri Bianucci and the staff of Veterinary Specialty Care in Mount Pleasant managed to save her tongue and restored her damaged mouth.

She now has to live with a scar around her mouth.

Nevertheless, she no longer has to fear about getting the same treatment again as she lives with a loving owner.

Ted Corvery who worked for Charleston County prosecution against Caitlyn’s abuser, William Leonard Dodson now is the owner of Caitlyn. He remembered the first time he saw Caitlyn after she was rescued.

“I really formed a good connection with her,” Corvey told  ABCNews4, “so that got me really emotionally invested in the case. From there, we just started preparing it for trial.”

Dodson later pleaded guilty in 2015 and was sentenced to five years in prison for animal abuse.

That marked the final end of Caitlyn’s abuse.

That was four years ago and today, the dog is thriving. “She’s super sweet and very playful,” Corvey shared.

“My wife and I are just very lucky to have her. After night one it was an obvious fit, and we knew she was never gonna go.”

Caitlyn even has a squad that she can play with; puggle-mix Lucy and Dachshund-mix Sully and will never have to live in fear again under the care of the Corveys.

Along with Corvey as he champions animal welfare, Caitlyn also has featured in newspapers, magazines, websites, and TV shows as a mascot for improving animal welfare.

#Caitlyn Update Charleston Animal SocietyCaitlyn is a SUPERDOG!Caitlyn was busy this week acting as an AMBASSADOG for…

Corvey hopes that Caitlyn’s story will continue to inspire everyone.

From an abused animal to a mascot for the fight against animal cruelty, Caitlyn is certainly inspiring.

This shocking series of photos show how a huge marlin fish...