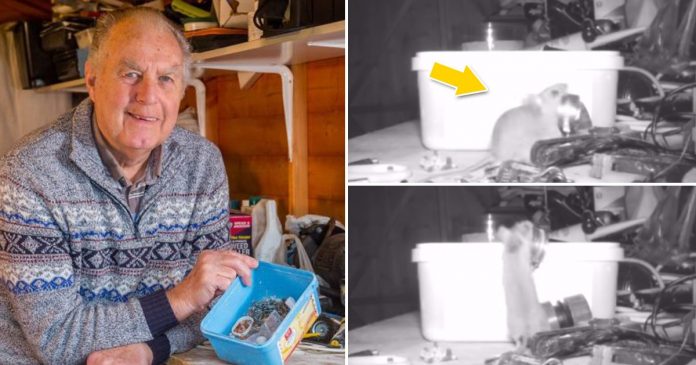 It seems like this pensioner no longer has to worry about tidying up his garden shed as there is a tiny helper who is more than helpful to do so for him.

72-year-old Stephen McKears from South Gloucester, UK started to notice that something was not right in his garden shed after a few strange occasions happened.

McKears who worked as an electrician before he retired found his plastic clips inside an old ice cream tub which he has been using to store peanuts for birds.

After the incident, more objects began to accumulate inside the ice cream tub night after night.

“I didn’t know what it was at first. The kids were saying it was a ghost,” he said.

“One day I emptied the tub out and spread the contents on the side — and the next day, they were all back in again. I thought I was going mad.”

For several weeks, the mysterious helper helped McKears tidying up his garden shed and stored all the screws and bolts neatly in the ice cream tub.

Even though McKears was pleased with the surprisingly helpful mysterious helper, he was still curious to find out what it actually looked like.

With the help of his neighbor, McKears set up a trail camera in the shed and left it for the night.

Through the footage, McKears saw how the tiny mouse picked up each bolt and screw and dropped it into the tub.

Even McKears was impressed with its organizing skills!

“I’ve been calling him Metal Mickey but some people have been saying he’s just mouse proud. I was quite amazed to see it—it is an amazing mouse,” he said.

“It was doing it for about two hours that night — he must have had to go for sleep after it.”

Watch how the helpful “Metal Mickey” does his job to help organize McKears’ garden shed every night: