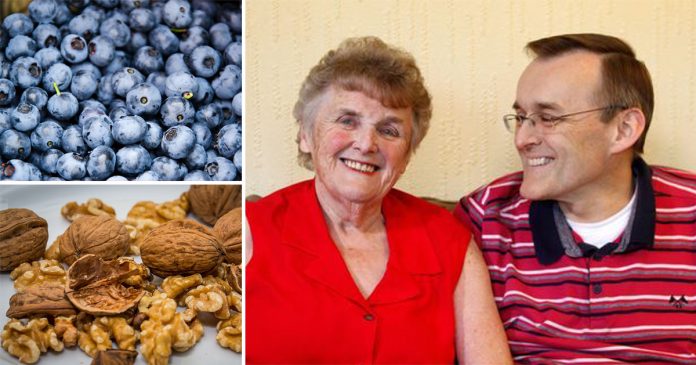 82-year-old Sylvia once suffered from dementia so severe that she could not even recognize her own son. Now, thanks to a drastic change in her diet, Sylvia has managed to reverse her dementia and restored her memory.

Sylvia was diagnosed with Alzheimer’s in December 2016. “When my mum was in the hospital she thought it was a hotel – but the worst one she had ever been in,” Mark told Manchester Evening News.

There was also the time when Sylvia called the police because she thought she was kidnapped by the nurses who were looking after her.

Even though Sylvia had been taking medications for her dementia, her condition was not getting any better.

That was when Mark thought of other alternatives and wanted to give a Mediterranean diet a try.

“When she left the hospital, instead of prescribed medication we thought we’d perhaps try an alternative treatment. In certain countries, Alzheimer’s is virtually unheard of because of their diet.”

“Everyone knows about fish but there is also blueberries, strawberries, Brazil nuts, and walnuts—these are apparently shaped like a brain to give us a sign that they are good for the brain,” he said.

On top of adopting a new diet, Mark also made sure that Sylvia spent some time every day to do cognitive exercises like jigsaw puzzles crosswords and socialize more.

After a while, Sylvia’s condition seemed to improve tremendously.

“It wasn’t an overnight miracle, but after a couple of months she began remembering things like birthdays and was becoming her old self again, more alert, more engaged..”

“People think that once you get a diagnosis your life is at an end. You will have good and bad days, but it doesn’t have to be the end. For an 82-year-old she does very well, she looks 10 years younger and if you met her you would not know she had gone through all of this.”

“She had to have help with all sorts of things, now she is turning it around. We are living to the older age in this country, but we are not necessarily living healthier.”

Mark and Sylvia’s approach has been assisted and endorsed by the Alzheimer’s Society.

“There is currently no cure or way of preventing the progression of the condition, but taking regular gentle exercise, eating a healthy diet and doing cognitive exercises can help someone with dementia manage their condition more effectively,” Sue Clarke from the Alzheimer’s Society said.

Furthermore, experts have also proved that a high intake of carbohydrates in one’s diet may increase the risk of dementia.

“One of the most striking studies on carbohydrates and brain health revealed that high-carb diets increase your risk of dementia by a whopping 89 percent, while high-fat diets lower it by 44 percent,” according to Dr. Joseph Mercola.

Below are the recommended foods that may reduce the risk of having Alzheimer’s:

Volunteers quit alcohol for 28 days, and the results are astonishing!