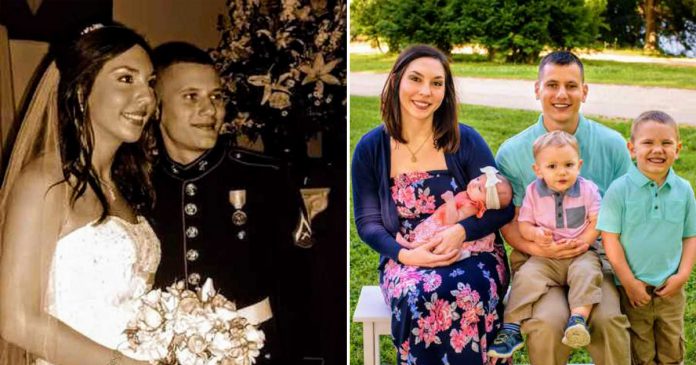 Getting married at a young age is a dream of high school lovers, Marie and Ryan. However, there are times when there are more downs than ups in their relationship than they have expected.

Still, both Marie and Ryan try their best to work everything out and become a better version of themselves as their family grows. This is their story.

“Ryan and I began dating in the early years of high school. It was a giddy, butterflies in your stomach relationship,” Marie wrote to LoveWhatMatters.

While Ryan planned to join the Marine Corps after graduated from high school, Marie chose to go to college.

Unfortunately, this meant that they would not be seeing each other as much as they wanted to.

Then, Ryan made a surprise! “Just weeks before Ryan finally left for boot camp, he asked for my parent’s blessing to marry me. He proposed one week later,” Marie wrote.

“I knew the risks. I knew that statistics were against us. People just don’t get married young anymore. But I knew that if I said no, every ounce of me would regret it. We were in love, and I was ready to commit to whatever life would throw at us.”

However, just four months before their wedding, Marie’s father passed away.

“I lost my dad to pancreatic cancer. That sent my world crashing down,” Marie wrote.

After they got married, life did not seem to get any easier. It was the first time for both Marie and Ryan to live far away from their families as they had to go through a challenging new phase in their lives.

Nevertheless, they made it through together as a couple despite Marie had to live on her own when Ryan was deployed for seven months.

“The separation and stress of his circumstances, along with me being alone for the first time in my life, was difficult.”

“After seven long months, the deployment came to an end. That day was truly something special,” Marie wrote.

“The moment Ryan was in my line of view, I broke down. A wave of emotions overcame me, and I wrapped my arms around him. We survived it. His deployment was the greatest test of our marriage and commitment.”

Both of them were thrilled to have their first baby but they later realized that being parents required a lot of patience.

Consumed by their newborn son, sleepless nights and being away from their families, Marie later was diagnosed with post-partum anxiety.

Luckily, Ryan was always there by Marie’s side and stepped up whenever her anxiety kicked in.

“On the days when my anxiety consumed me, Ryan would demand he takes our son so I could soak in a hot bath or get out of the house for coffee. When our son had blowouts, he changed them. When he saw bottles piling up in the kitchen, he washed them. Ryan was present and my partner through it all.”

“He never once walked in the door and refused to offer a helping hand. We were, and still are, equals. The darkness that had hovered over us lifted.”

It has been far from easy for both Marie and Ryan but they are definitely thankful to have each other’s back through highs and lows in being parents and partners.

“That commitment and love is what carried us through the next five years and to where we are today.”

“There is no peak of love with your spouse. Love is ever changing and growing. Be each other’s partners in all aspects of life. Remember that keeping your love alive takes work and willingness.”

“Don’t forget that fiery, exciting passion that started it all. But, know the seasons of life will hit your marriage, and the only thing you can do is adapt and grow TOGETHER.”

Some people are just born lucky and these 17 people are...