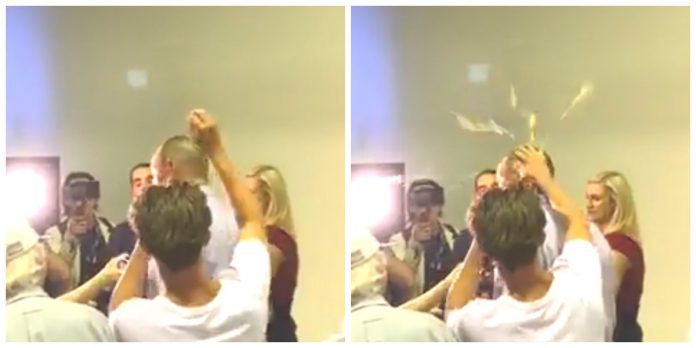 Far-right Australian senator Fraser Anning who blamed the New Zealand terror attack on immigration was egged by a teenage boy on March 16.

The Queensland senator who released a statement saying that “increasing Muslim presence” was to blame for the terror attack happened recently in Christchurch where a right-wing extremist killed 49 people and wounded dozens more.

Senator Anning who has been a senator for Queensland since November 2017 posted a tweet, saying “Does anyone still dispute the link between Muslim immigration and violence?” shortly after the news of the terror attack broke.

Does anyone still dispute the link between Muslim immigration and violence?

Following his controversial tweet, Senator Anning later made a statement that Muslim immigration was the one inspired the terror attack, not gun laws or those who hold nationalist views.

“As always, leftwing politicians and the media will rush to claim that the causes of today’s shootings lie with gun laws or those who hold nationalist views, but this is all cliched nonsense.

“The real cause of bloodshed on New Zealand streets today is the immigration program which allowed Muslim fanatics to migrate to New Zealand in the first place,” he said as reported by The Guardian.

His offensive remarks have been heavily criticized by many including Australia’s prime minister, Scott Morrison.

The remarks by Senator Fraser Anning blaming the murderous attacks by a violent, right-wing, extremist terrorist in New Zealand on immigration are disgusting. Those views have no place in Australia, let alone the Australian Parliament.

“The remarks by Senator Fraser Anning blaming the murderous attacks by a violent, right-wing, extremist terrorist in New Zealand on immigration are disgusting,” Morrison said.

“Those views have no place in Australia, let alone the Australian Parliament.”

Senator Anning later appeared at a Conservative National Party Meeting in Melbourne yesterday on March 16 where he was confronted by a 17-year-old activist who cracked an egg on his head.

Omg, Fraser Anning, the Australian Senator who said bigoted comments after the Christchurch mosque massacre, got hit with an egg during his press conference. #eggboypic.twitter.com/VLFD59vg9H

In response, Senator Anning swung two punches at the young man which one of them at least hit his head.

A staffer for the senator later can be seen separating the senator from the 17-year-old while Senator Anning’s supporters tackled the teenager to the ground.

The live-stream video of the incident has gone viral ever since as it becomes trending on social media platforms worldwide as many people commented on the incident.

“This kid is so brave & amazing. Frazer Anning should be charged with assault,” one user and thousands other condemning his action

According to ABC, the teenager from Hampton was later arrested by the police but has since been released pending further inquiries.

A Go Fund Me page has been setup to collect donations to cover the teenager’s legal fees (and to buy more eggs of the course as well).

The Go Fund Me page to "buy more eggs" for the teen who egged far-right Australian senator Fraser Anning has already doubled its $2K goalhttps://t.co/L4dYFir4EB pic.twitter.com/c2lTsenYdj

Meanwhile, an online petition has also been set up to call for Senator Anning’s removal from the office.

“Senator Fraser Anning has no place in the government of our democratic and multicultural country. We request that he be expelled from his position as Senator, and investigated by law enforcement agencies for supporting right-wing terrorism,” the petition writes.

“On the 15th of March, 49 innocent people were slaughtered in their place of worship. Fraser Anning, under the banner of Senator, made multiple offensive statements about this attack.”

The online petition has collected 344,000 signatures so far.

Christchurch Terror: A 17-year-old boy was arrested after allegedly slamming an egg on Fraser Anning's head at a speaking event at Moorabbin today. The teenager has since been released pending further inquiries. Meanwile, Prime Minister Scott Morrison has condemned comments from Senator Fraser Anning blaming the Islamic community for the New Zealand mosque shooting, saying they are "appalling and they're ugly and they have no place in Australia".www.7plus.com.au/news #FraserAnning #7News