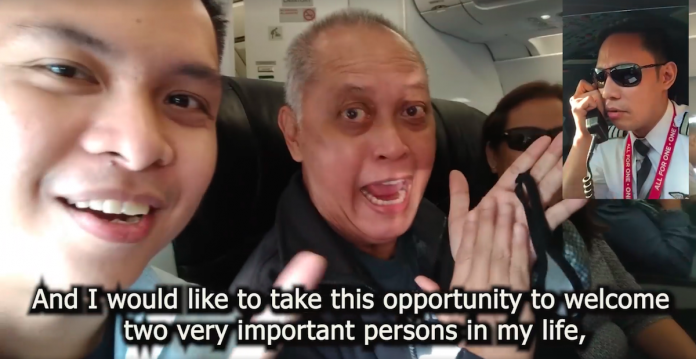 A touching video of an AirAsia pilot making a heartwarming announcement to his parents on their first ever flight together has warmed the hearts of netizens around the world.

The pilot Genesis Bernardo paid tribute to his beloved parents Paul and Solly on the Taiwan-bound flight, and a video capturing it all has gone viral on Facebook.

His brother, Joshua Bernardo captured the sweet moment on their flight from the Philippines to Taipei.

The parents looked so excited and proud when they heard their son’s voice on the speaker!

“Good morning, ladies and gentlemen, from the flight deck, this is Genesis Bernardo, your captain speaking,” Genesis can be heard saying.

The touching clip has been shared almost 40,000 times and has garnered over 81,000 likes on the social media site.

He used the moment as an opportunity to thank his parents and said that they are “two very important persons in my life.”

Their faces are priceless!

Genesis continued to say that it has always been his dream to fly them one day, “after so many years of flying in the airline.”

“I would like to thank you for loving me unconditionally as your son and for teaching me to do my best in everything that I do,” he continued.

“I also thank you for inspiring me to never stop dreaming big and making me believe that everything is possible as long as you have faith,” he added.

He even said that his parents are the main reason for him becoming a pilot today. How sweet!

“It’s truly an honor and pleasure to have you on board. I am so proud of you for bringing me where I am right now and I hope I also make you proud.

“Cheers to all the parents who always been an inspiration to their kids and to every one of us who’s been inspired by their parents to achieve their dreams,” he said.