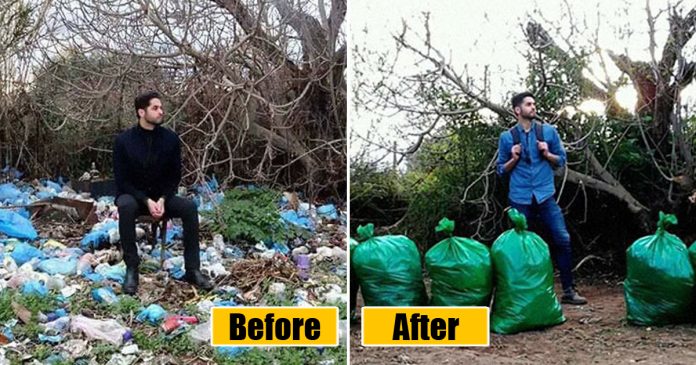 Who says social media can’t be used for good? While most viral moments on social media are either hilarious or outrageous posts, a new viral challenge to help save the planet has kicked off, and we’re huge fans.

Social media users are challenging each other to post before and after photos of themselves cleaning an area which is covered in rubbish and debris under the hashtag #Trashtag!

We think it’s an amazing idea, because every year, 1.3 billion tonnes of house waste is generated, with a huge amount ending up dumped in the ocean.

So when a Reddit user uploaded a photo of someone who had completed the challenge, it blew up like crazy.

“Here is a new #challenge for all you bored teens. Take a photo of an area that needs some cleaning or maintenance then take a photo after you have done something about it, and post it here,” he wrote.

Take a scroll to see some of the best and most intense before and after photos from the challenge which is helping our planet!

1. This man from Nepal collected over 10 bags of trash to clean up the environment!

2. This beach has had a serious makeover, and it looks like a completely new place. It was cleaned up by just one family—amazing!

3. This stunning cleanup of Mumbai beach was completed by over 500 kind-hearted volunteers. They collected over 5 million kg of trash! Woah.

4. Same goes for Manila Bay, it looks beautiful now. In January, thousands of volunteers tidied this beach after the Supreme Court issued a cleanup order.

5. This trio wanted to do their part for the environment. It looks so much better now!

6. These amazing school kids from Tetso College in India decided to take part in the incredible #Trashtag challenge too!

7. So clean!! 10 amazing people spent their Sunday morning cleaning this up.

8. These adorable kids helped to clean up a beach in Florida—their parents raised them well for sure.

9. Striking a pose before and after cleanup!

What are your thoughts on this challenge, would you take part? Let us know in the comments!