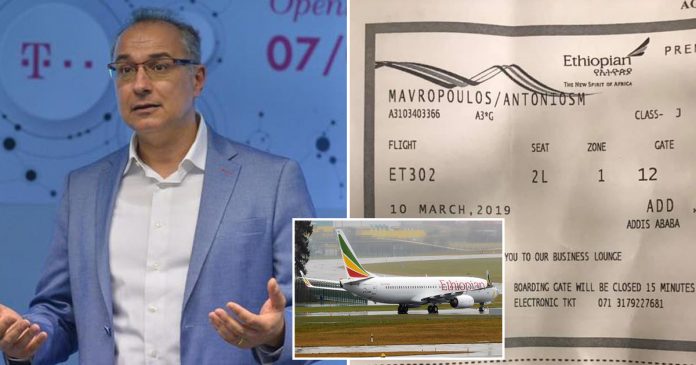 Antonis Mavropoulos shared on his Facebook account about how he was not let to board flight ET302 which has recently crashed and killed all passengers and crews on board.

Mavropoulos was supposed to leave for Nairobi, Kenya to attend an annual assembly of the UN Environment Programme.

He would have been the 150th passenger of the flight but he was late for boarding when he had to search for his missing baggage for 40 minutes after an earlier flight of his journey.

Mavropoulos also shared how he was being adamant to board the flight and was “mad” after no crews entertained him when he finally reached the departure gate before the plane took off.

“I was mad because nobody helped me to reach the gate on time. I was screaming to put me on but they did not allow it,” he wrote.

He later learned about the plane’s fatal crash just several minutes after it departed from the airport in Addis Ababa, Ethiopia. The police then took him in for questioning.

“They led me to the police station of the airport. The officer told me not to protest but to pray to God because I was the only passenger that didn’t board the ET302 flight that was lost.”

The police wanted to question why he did not board the plane. “They said they couldn’t let me go before cross-checking my identity, the reason I hadn’t boarded the plane etc.”

In his post, the president of the not-for-profit International Solid Waste Association also recalled the moment he looked through the window and saw the passengers of the flight settling into their seats.

He realized how lucky he was after learning that he had narrowly escaped the fatal plane crash and quickly contacted his family to let them know that he was not on board.

“This is one of those moments which changes one’s perspective of life,” he told Alpha TV.

“You realize that our lives are hanging from threads. I just want to send many kisses to my wife, my mother and my daughter.”

Last Sunday, the Ethiopian Airlines jet crashed near the town of Bishoftu, killing all 149 passengers and eight crew members.

It is recorded as the deadliest aviation accident in Ethiopia’s history.

The cause of the plane crash is still under investigation.