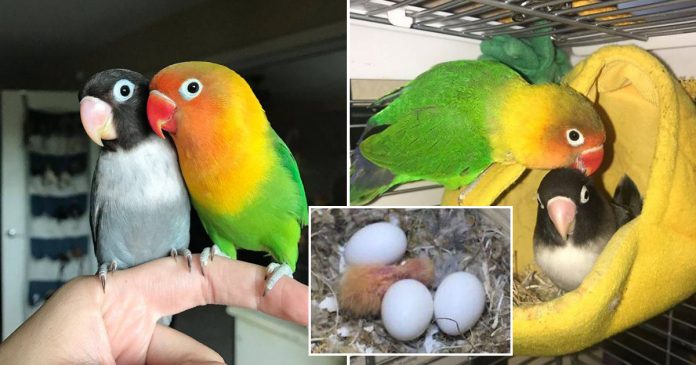 What happens when two very different looking parrots fell in love and have babies together?

Kiwi is the colorful green and yellow parrot who is also a new father and lovely partner to Siouxsie, the matriarch of the growing brood.

Unlike Kiwi, Siouxsie spots an elegant combination of grey and black plumage.

At first, Kiwi lived alone with his owner, Maura. However, Maura later decided to get Kiwi a company so that he would not feel lonely when she was not around.

Later, Maura brought Siouxsie in to live with them and the pair quickly fell in love with each other!

Not long after they first met each other and fell in love, they decided to build a family together.

At last, the good news arrived. Siouxsie had laid four eggs in their nest!

All was left was to wait for the eggs to hatch and it did not take long for that to happen.

One by one, each egg later hatched and revealed adorable tiny baby parrot.

At first, the four siblings did not grow their plumage like their proud parents just yet.

Nevertheless, as time passed by, the baby parrots slowly looks more and more like their parents.

And a few weeks after they were hatched, they already look like a splitting image of their parents!

Each of them now has a colorful plumage of grey, black, yellow and green.

You can see every bit of Kiwi and Siouxsie in all of their baby parrots!

We believe that both Kiwi and Siouxsie will be great parents to their beautiful babies!

A little gif of this amazing familly!
Thank you for sharing photos ? pic.twitter.com/34GJwNudTY