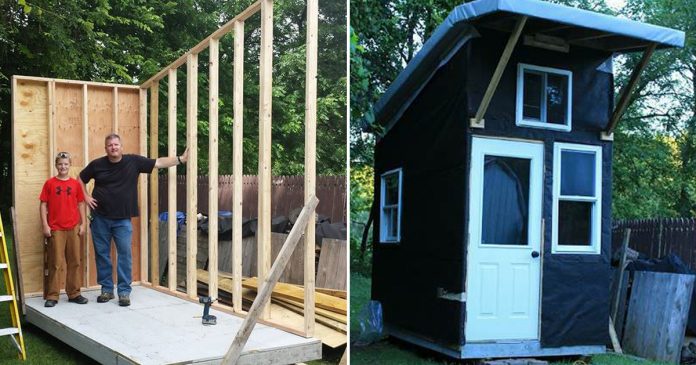 Luke Thill is only 13 years old but instead of spending his spare times playing games, the young boy decided to try his hand on building a home for himself.

The Iowa middle school student first came up with the idea after he watched a YouTube video about a tiny house and soon, the boy quickly became obsessed with the idea.

“I was just on YouTube looking around and came across a tiny house idea and then that spiraled into looking at almost every YouTube video there is, it felt like,” Luke told ABC News.

“I got obsessed with them and decided to build my own,” he said.

Luckily, Luke’s parents were more than supportive as they later gave their son the go-ahead to build his tiny home in their backyard.

“We said, ‘If you’re that serious we have to set some ground rules,’” Greg Thill, Luke’s father told ABC News.

However, it came with one condition: Luke had to work on his own to get funds to build the tiny home.

“We told him he had to have the financial responsibility of it, raise the money and choose the materials and stay in the budget,” Greg said.

Nevertheless, it did not stop Luke from continuing his project as he later raised US$1,500 all by himself by mowing lawns, helping neighbors and friends.

Soon after he managed to raise funds to build the home, Luke then began to construct the home.

Together with his father, he built the home while his mother helped him with the interior decorations.

On top of help from his parents, Luke was also lucky to get some useful tips and helping hands from his supportive neighbors. “I have a neighbor who is a professional electrician so I cleaned his garage out and he taught me how to wire the house,” Luke said.

“And in Cub Scouts I knew a guy who was a carpet layer and I mowed at his apartment buildings and he helped me install the carpet.”

It took him a year to build the tiny home but the result was stunning.

The home may be tiny but it has everything that a home needs. There is a TV, seating area, mini refrigerator, and a fold-up dining room table.

When his story made headlines later on, many teenagers around his age were inspired by Luke’s creative idea.

“Now lots of kids have messaged me and showed pictures of their tiny houses that they’re building and they’re even younger than me,” he said.

Now, Luke is planning to help his brother, Cole, to build a teardrop trailer and build another house after that.

“In a couple of years I want to build a bigger house and stay in it full-time,” he said.

Check out Luke’s video log on how he stays warm in his tiny house.