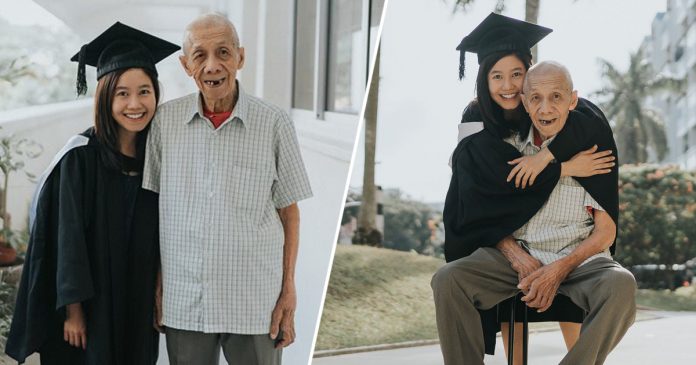 Singaporean Ranie just recently graduated from her school in Australia and she wanted to commemorate the milestone achievement with the people who matter the most to her—her grandparents.

The only problem was her grandfather who suffered a stroke in early 2018 was not well to travel to Australia and he could no longer walk as well as he used to.

However, Ranie was determined to celebrate her graduation with her grandfather so, she brought the graduation ceremony to him instead!

The graduate later flew back home to have a photoshoot with her grandfather and for him to see her in the graduation robe.

Ranie’s grandparents were the ones who took care and raised her when she was young since her parents were frequently away from home for work.

Hence, it was not a surprise that the lady thought of her grandparents first when she graduated.

For the photoshoot, Ranie hired the services of a photography studio to capture the beautiful moments of her in graduation robe and standing next to her beloved grandfather.

Ray who is co-head of photography team said that he was moved by Ranie going out of her way just to make sure her grandfather could see her in the robe.

“Not forgetting it was tough for a student to buy a ticket back just to spend some time with her grandpa. It was very thoughtful and also inspiring,” he told Mothership.

“I’m sure many of us thought of something we want to do with our loved ones but put it off until there was no chance to do so. She didn’t want to live that regret.”

The photo shoot apparently not only touched Ranie’s grandfather’s heart but also, everyone who was involved.

“The session was heartwarming seeing how she took great care of grandpa and it was especially emotional when grandpa asked her when she will be leaving again,” Ray said.

When the photography studio took to Facebook about the heartwarming photoshoot, many users praised Ranie for not forgetting those who had helped her achieve the milestone.

Who says graduation pics must be taken at the studio? It is the people that matter. Whatever we achieve today we owe it…

Even though she had to sacrifice flying back to Singapore from Australia for the photo shoot, she knew that it was all worth it as long as she got to celebrate it with her loved one.