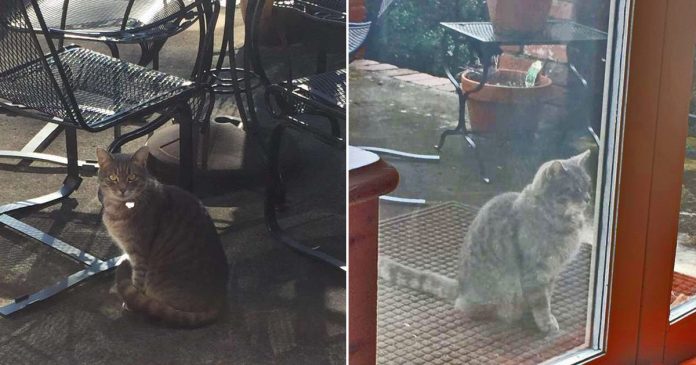 It has been a year since her canine playmate passed away but Baby Grey still waits for her to show up to play together.

Their friendship started two and a half years ago when Baby Grey wandered in a random backyard after climbing the fence. That was when she first met the friendly guard dog named Gracie.

Gracie was an American Eskimo dog. In spite of her role as the protector of the house, Gracie loved to meet other animals.

According to Shea Belew Brennaman who was Gracie’s owner, she first noticed the cat went inside her fenced-in backyard and made friends with Gracie a while ago.

“I think it lives two cul-de-sacs over from us and I don’t know its name. Me and my family just refer to it as Baby Grey,” Brennaman said in an interview with The Dodo.

Gracie was a friendly dog and she was always more than happy to approach and befriend anyone she met at the house including random chipmunks or rabbits that just happened to pass through the yard.

So, when she saw adorable Baby Grey the cat, she immediately charmed her with her friendly nature.

It did not take long before Gracie and Baby Grey became close friends after their first encounter.

“Gracie accepted her into our yard immediately and the two became fast friends,” she said.

Later, Baby Grey was often seen frequenting Brennaman’s house to play and spend time together with her best friend Gracie.

“When Baby Grey started coming over frequently the two of them shared tomatoes and sunbathed together. Sunbathing was their absolute favorite activity,” she said

“We would leave Gracie tomatoes on our porch, as they were her favorite treat, and she would share them with the cat.”

“Which was a huge deal because Gracie was very particular about sharing food,” Brennaman explained.

Everything went normal after their friendship started blossom until in late October 2017 when Brennaman noticed that there was something unusual about Gracie.

She had just celebrated her 12th birthday and Brennaman suddenly realized that the dog no longer as playful and energetic as she used to.

A trip to a vet later confirmed their greatest nightmare; Gracie had aggressive lymphoma.

Ever since the diagnose, Gracie spent a lot of her time hanging out on the porch as if she was preparing for her final goodbye to her animal friends. “Gracie spent most of her remaining days on the cold porch,” Brennaman said.

“I think part of it gave her relief but, in reality, she was saying goodbye to her territory and to all of her friends in her yard.”

Baby Grey also visited her during the last few days and the two just lying next to each other, basically spending every second they had just to appreciate each other’s presence.

“Baby Grey came to see her several times in her last days and, while there was no tomato eating, the two just laid there to be with each other,” Brennaman continued.

“They had that kind of connection where nothing needed to be said or done. They just wanted to be with each other.”

A little less than a month later in November 2017, Gracie passed away and for Baby Grey, she dealt with the death of her best friend in her own way.

“Since Gracie’s death, several times a week, Baby Grey will come to our porch,” Brennaman said.

“She will first come right up to the door and look in for Gracie. I don’t know how long she waits, sometimes she’ll wait for 20 minutes and then she will walk away to the porch where she will sit a while before she eventually lays down and sunbathes.”

Brennaman was not sure how long Baby Grey would continue to wait for Gracie. She expected her to come to their house but seeing Baby Grey painfully waited for Gracie broke her heart.

“It breaks my heart to see Baby Grey still looking for Gracie,” Brennaman added, “but at the same time it gives me so much hope that these two animals had such a strong bond.”

This cat walks up to 7 miles every night to steal neighbor’s shoes, the owner needs to return the shoes by using technology

This vet clinic is hiring someone to fill in their new...