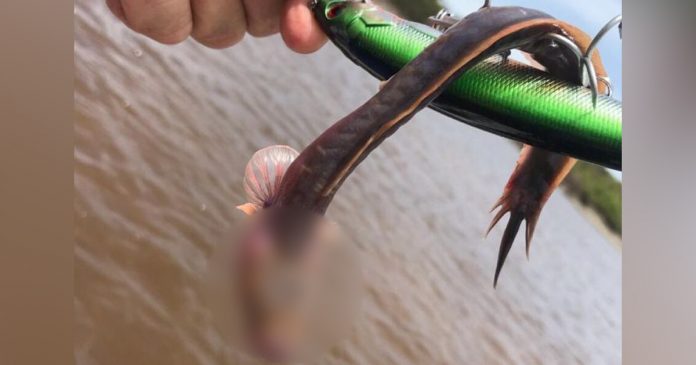 Tee Hokin was fishing at a river near the Kakadu National Park, Australia and was expecting to reel in freshwater fish. However, she was left baffled when he accidentally caught an alien-like fish.

The Australian native caught a brown-purple fish that looked nothing like any freshwater fish she had seen before.

The strange-looking fish was slimy like an eel but it had a set of glasslike teeth and no eyes.

“Honestly the first thing I thought about was the Alien movie with Sigourney Weaver and that thing that comes out of people’s stomach, that’s exactly what I thought, and that’s what they describe it as when you look it up on the internet,” Ms Hokin said to ABC News.

“It had a really weird head, but the body was like an eel and it didn’t even move or wriggle; it was like stunned, like stealth mode… I was like ”what the hell is that’?””

While the alien-like fish seemed like out of this world, Ms Hokin said that no one would ever be willing to hold the fish with bare hands.

“It has really sharp teeth, it could bite, no worries, you would not be willing to put your finger near it,” Ms Hokin added.

“These fish are found in fresh and brackish estuaries, and coastal marine waters in the western Pacific and Indian Oceans, and there are a number of species present in Australia,” he said.

Due to their poorly-developed eyesight, the fish often relies on touch to catch their prey. That also explained why the fish has a set of razor-sharp teeth. “Because when they find lunch, they don’t want to let it go!” he added.

The fish mostly spend their time staying under the mud and avoid coming to the surface.

However, expert from the Museum and Art Gallery of the Northern Territory (MAGNT), Dr Michael Hammer did not reject the assumption that the fish might be a newly discovered species as it was difficult to identify its species without an X-ray.

He added that the fish is not dangerous albeit its sharp teeth. “They still have very glass-like, small little teeth so a few people have said when they’ve caught them [that] they get a bite from them, but it’s not dangerous,” he said.