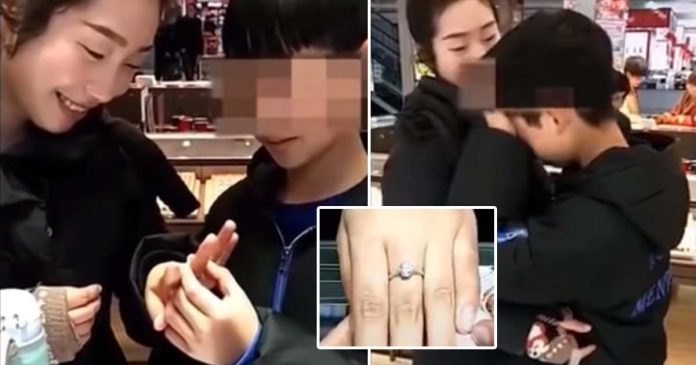 What this 10-year-old boy from China did for his mother recently speaks volume about his love toward his mother.

The boy from Hubei, China made headlines when he used all the monetary gifts he received over Chinese New Year to buy a diamond ring for his mother.

According to SoraNews24, the young boy has saved more than 8,800 yuan (US$1,200) over the recent Chinese New Year and bought a ring for his mother.

The boy had pulled his mother into the jewellery store at a shopping mall in Tiananmen in central China’s Hubei province to let his mother browse through the diamond ring of her choice.

“He said he wanted to buy a diamond ring after seeing his classmates’ mothers all wear diamond rings,” an employee at the jewelry counter said.

The mother who thought that her son was only joking at first tried to leave the jewelry store.

However, her action later led to the boy to burst into tears as he is later seen hugging his mother and sobbing.

The son apparently did not want his mother to feel left out as all of his classmates’ mothers often wore expensive and sparkly diamond rings.

The mother who understood her son’s good intention can be seen comforting the boy and later used another tactic in order to dissuade her son from buying the expensive piece for her.

She later points to another diamond ring with an eye-watering price tag of 50,000 yuan (US$7,455) and says that she prefers the much more expensive diamond ring.

“Mom likes this one. You can save more money and buy this one for me later,” said the employee who overheard their conversation.