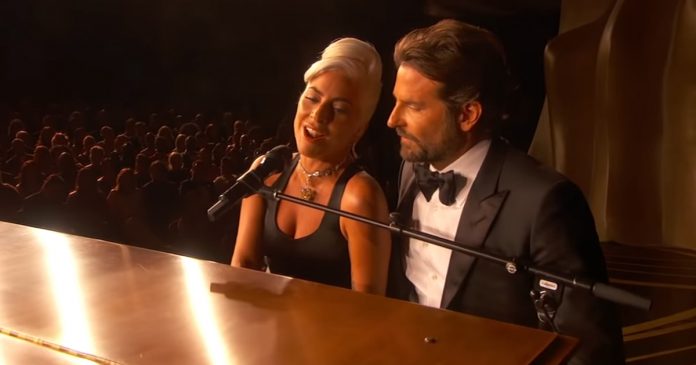 After rumors speculated around that she and Bradley Cooper were involved in an actual romantic relationship following their intimate Oscars performance, Lady Gaga finally opened up to Jimmy Kimmel about the rumors.

Gaga and Cooper who was her co-star in the film “A Star Is Born” raised eyebrows after they performed a number from the film, “Shallow” which also won the award for “Best Original Song.”

During the interview, Kimmel pointed out about Gaga and Cooper’s intimate performance and asked Gaga if that may be linked to a possible romantic relationship between them.

She told Jimmy Kimmel that they knew that their performance was intimate and that was exactly what they wanted the audience to feel.

However, Gaga shut down the rumors and commented that it was all for show.

“Yes, people saw love and guess what? That’s what we wanted you to see,” Gaga said to Kimmel.

She must have been overwhelmed being asked the same question again and again that she funnily rolled her eyes the moment Jimmy asked whether they are romantically involved.

“[Shallow] is a love song, A Star Is Born is a love story,” she said. “It was so important to both of us that we were connected the entire time… When you’re singing love songs, that’s what you want people to feel.”

During performing on the Oscars stage last Sunday, Gaga and Cooper shared a piano bench while singing “Shallow” before the pair gazed into each other’s eyes affectionately.

Cooper was also seen wrapping his arm around Gaga’s waist during the performance which has led the rumors about them being a couple sparked.

While fans have been captivated by their on-screen chemistry, both Gaga and Cooper explained that they are just colleagues.

“I’m an artist and I guess [Bradley and I] did a good job… fooled ya!” she said before bursting into laughter.

The 32-year-old singer also took to Twitter to express how remarkable it has been to work with Cooper.

“Nothing could be more special than sharing this moment at the Oscars with a true friend and artistic genius,” she tweeted.

Nothing could be more special than sharing this moment at the Oscars with a true friend and artistic genius. pic.twitter.com/Khy9ooCJDZ