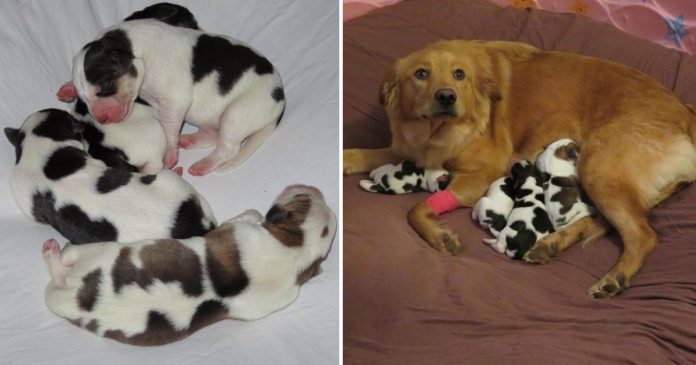 The Blacks couple has fostered more than 20 dogs so when they encountered a heavily pregnant Golden Retriever, they were more than excited to welcome her puppies.

At the time when Rosie began to live with the couple, she was nearing her due date.

By the time she gave birth to her puppies, Katie and John were thrilled to see the puppies but they never expected that a little surprise was in the package.

Rosie gave birth to four little puppies. They were super adorable but the puppies looked nothing like their mother.

With black spots all over their white coat, the puppies looked more like baby cows than Golden Retriever puppies.

While everyone was surprised by the shocking appearance of the newborn puppies, Rosie seemed to not mind about it.

The couple then named the four puppies Daisy, Clarabelle, Betsy, and Moo, as inspired by their unique looks.

Even though Rosie’s story may be quite surprising, it is common for puppies to not resemble their parents at all.

According to The Nest, while it is true that a puppy will inherit traits from both of its parents, the chance of it looking like either of its parents depends on what genes each parent carries.

“Dominant genes always outrank recessive ones and decide which traits your pup will exhibit as part of his physical appearance,” according to the Australian Shepherd Health & Genetics Institute.

Of course, none of that matters to Rosie who is enjoying her motherhood. “She is one proud mama,” Katie said.

Heart-wrenchingly endearing pictures of the most misunderstood dog in the world—the...