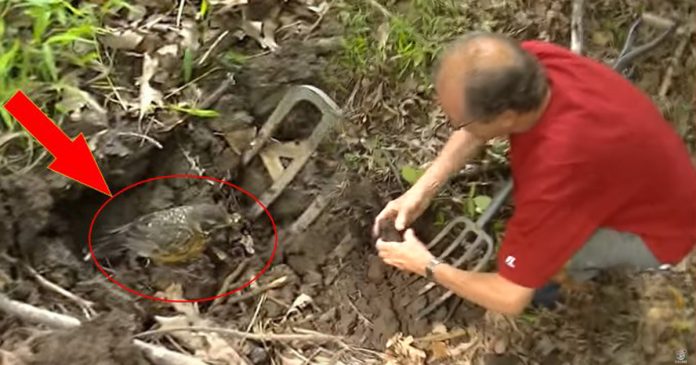 A smart baby robin has figured out the easiest way to catch worms and that is by having a human finding the worms for it.

There is a saying that “the early bird catches the worm” but it seems that the saying does not apply for this baby robin. The time does not matter as it has its very own helper to catch the worms.

In a viral video on YouTube, a baby robin can be seen waiting patiently next to a man as he digs the soil in the yard with a pitchfork.

The man was getting ready for some gardening when the baby robin approached him. Man in red shirt later decided to help the bird find some worms for its next meal.

The baby robin seems pretty excited at the sight of wriggly worms unearthed from the soil as the man tells it to be careful of the sharp pitchfork.

The kind-hearted gardener even takes his time to point out where the worms are to the baby robin with his finger and it seems that the baby robin can understand him well!

At some point, the man decides to pull out a worm and feed the hungry baby robin. The bird apparently is more than happy for the special treatment.

Obviously, the baby robin left the place afterward with a full stomach!

The video which was posted on YouTube in 2016 has received more than 4.9 million views!