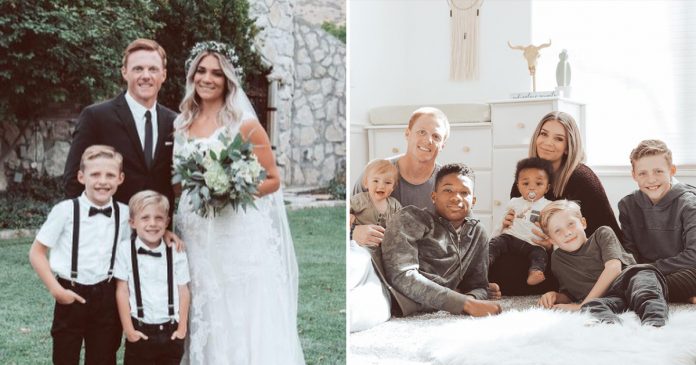 Almost every girl dreams of starting and raising a family of their own one day, and the thought of not being able to conceive for most is terrifying and heartbreaking.

When she was just 13, adoptive mom Heather Crock was devastated when she was told she would never be able to have her own kids.

She dreaded having to one day break the news to her future partner, in case it were a deal breaker.

But she never imagined she would one day be an amazing mom to five kids of her own.

She met and fell in love with a single dad named Jason, who had two gorgeous kids—they soon tied the knot.

He didn’t care that she couldn’t have kids—their love was stronger than that!

He told her that even if they adopt, “They would be OUR children.”

They decided they wanted more kids and soon were approved to adopt!

But they didn’t want to use an agency as they knew how expensive it could be to go down that route—up to $55,000!

So they advertised themselves and their lives on social media, hoping someone would get in touch, but most tried to scam them.

But in October 2017, they received a phone call from a pregnant mom which was about to change their lives forever!

They met up and Heather felt her kicking bump and saw some ultrasounds of her future baby boy.

Jason and Heather were so emotional when the expectant mom asked them to take care of her child forever.

And then they received another call, from an expectant mom in Missouri who asked the pair to love baby Ellis forever!

They knew looking after two newborns would be tough, but they had so much love for the little boys.

They would do anything for them.

Jason even cut Ellis’ cord and when he was placed in Heather’s arms for the first time, she kissed his little hands and fingers.

After a few months, they contacted Ellis’ mom again and it turned out she was in a complex situation, so her eldest son visited Jason and Heather—and ended up staying for good!

Sean decided to stay with his baby brother and was doing really well in the local football team.

In under nine months, they had three totally new kids! And they loved it!

Their love for each other only gets stronger as each day passes.

“There have been many ups and downs and everything in between. But we wouldn’t trade it for the world,” Heather said.

We’re so happy for this sweet family!