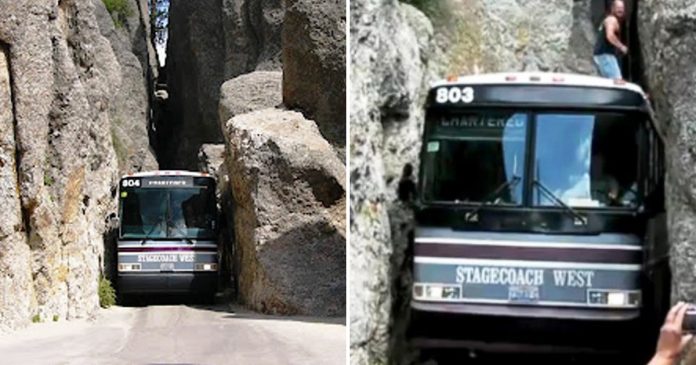 A family was enjoying their vacation around Rapid City, South Dakota when the charter bus they’re taking had to go through the Needles Highway. However, they were really concerned as soon as the bus approaches an extremely narrow granite tunnel.

The man, a YouTube user called Fortnighte, was at that time with his family enjoying the amazing sceneries of the Black Hills and Badlands, where the famous Mount Rushmore, Wind Cave National Park, Crazy Horse Memorial, and Jewel Cave National Monument are located.

Passing the 14 miles Needles Highway, the family had a chance to look at many amazing wild animals such as bison, mountain lion, elk, mule deer, and bighorn sheep before their attention shifted to the Needles Eye Tunnel located next to the Rollins Pass Summit.

They were enjoying amazing sceneries until they saw this—an extremely narrow granite tunnel.

It suffocates you just by looking at it.

It was said that the place was named Needles for its sharp and sticking out granite rocks inside the tunnel. Looking at the narrow granite tunnel, it looked almost impossible for any vehicle to get through. However, the charter bus driver decided that they can fit into that.

Miraculously, the charter bus got through the narrow tunnel after just a few minutes, thanks to the driver’s expert maneuvering skills! As a bus driver himself, Fortnighte admitted that he was mesmerized by this attempt made by the bus driver because he truly believed that the bus was not going to make it.

He made it! Talk about expert driving skills!

No doubt he is the expert!

Scary moment when toddler suddenly falls into pool without anyone realizing—astonishingly...