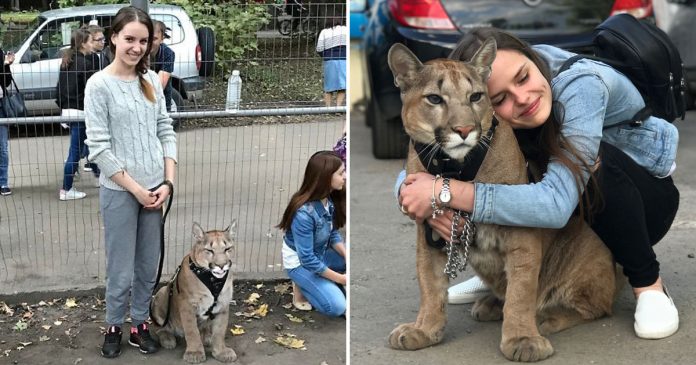 The Russian couple first met Messi at Saransk Zoo in Penza when he was just eight months old.

The couple soon fell head over heels with the puma cub that they decided to adopt him.

Messi was one of the three puma cubs who was born in the zoo. He and his two other siblings, Suarez and Neymar were named after popular football players in honor of Russia being the host for the World Cup in 2016.

Messi was then transferred to Saransk Zoo when he was three months old due to a health complication.

Unlike his healthy siblings, Messi was only two-thirds the size of an average puma cub.

That was when the couple decided to adopt the puma cub and helped nurse him back to health.

“We had three days of thinking hard about whether it was moral to keep a puma, and whether it was common sense to have one. But nothing could fight our sudden wish,” she said.

“So we went to the zoo and started negotiations to buy Messi. We were surprised ourselves when they agreed.”

“We were so happy, and even though he was quite weak and demanded a lot of attention, we didn’t regret our decision at all.”

According to Mariya, her husband Aleksandr had always been dreaming to raise a large breed cat like lynx so getting a puma as a pet was indeed a surprise.

“It’s hard to explain but we believe that having this puma is part of our destiny,” she said.

Nursing Messi back to health proved to be a challenge for the couple when they first adopted him.

As Messi was still a cub, they needed to pay a lot of attention to him.

The couple even converted their hallway into a puma playpen to allow Messi play and move freely.

They also invested in a special coat and a harness so that they could bring Messi for a walk.

“He is like a dog. We started taking him for a walk, step by step. The animal hadn’t been really active before, Aleksandr said in an interview with RT.

The couple tried to find a wild animal handler but to no avail. Thankfully, they found a dog training school that Messi could attend.

As it is very uncommon to raise a puma inside a house, the couple took the chance to document everything about Messi on his very own Instagram account and people just love it.

Lucky for them, Messi has been easy to take care of as the puma has a calm temperament.

Even though both Mariya and Aleksandr love having Messi as their pet, they, however, did not recommend having wild cats at home as it could get quite dangerous.

“Of course, it’s quite dangerous having such a large cat at home, but Messi is a special animal.”

The couple believes that it would not be a problem for Messi to live with them as he has never lived in the wild.

“He is just an ordinary cat, but a big one. He has all the habits of a cat,” Aleksandr said.

Watch Messi the puma plays with his favorite toy here

A Snow Leopard Enjoys Playing with the Red Ball Until It...