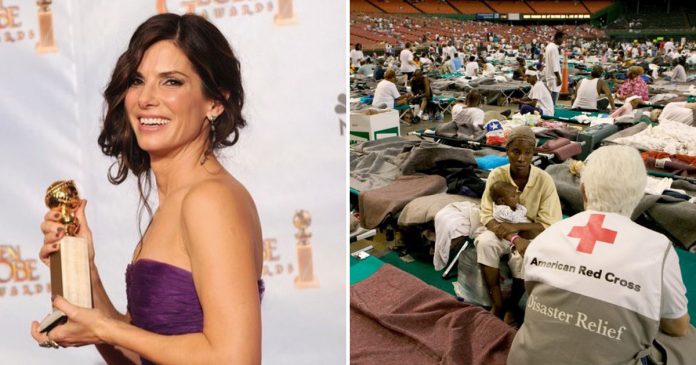 Award-winning American actress Sandra Bullock has proven to everyone that she is not only beautiful on the outside, but on the inside too.

What most people do not know is that she is extremely kindhearted and has secretly been donating millions to many causes over the past ten years!

Not just a pretty face—when she was named People magazine’s 2015 ‘Most Beautiful Woman of the Year’, she said, “Real beauty is quiet.”

If actions speak louder than words, then Sandra is truly beautiful—she just wants to have a good heart.

Last November, Sandra generously donated a huge some of around $400,000 to the American Red Cross and around $100,000 to the Humane Society of Ventura County, California. This was all to help with firefighting relief efforts in California.

The 54-year-old also gave a generous $1 million dollars to the American Red Cross after Hurricane Harvey.

“I’m just grateful that I can do it. We have to take care of each other,” she told E! News.

The A-list actress, who was named highest paid actress in the world in 2010 and 2014, makes sure some of her money goes towards a good cause.

She was actually the first celeb to donate funds after Japan’s catastrophic 2011 magnitude 9.0 earthquake and tsunami—she donated a huge $1 million.

Her generosity isn’t just recent—according to E! News, Sandra has donated $5 million to various charities since 2001.

And another $1 million to Red Cross to help with relief efforts after Indonesia’s devastating tsunami in 2004.

The following year, when Hurricane Katrina struck, she donated $1 million to Red Cross.

What an incredible woman!