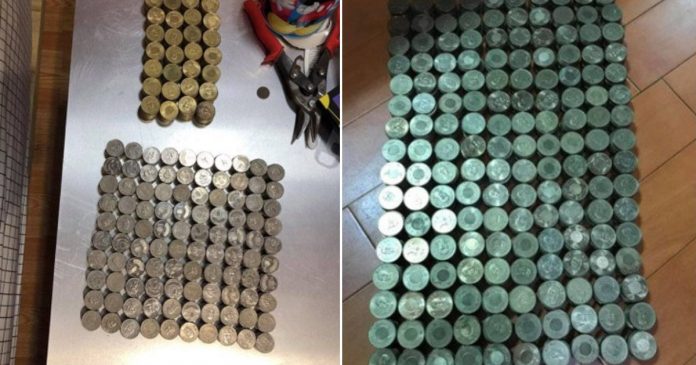 A married Taiwanese man just made the best decision in his life and won the hearts of many when he voluntarily decided to quit smoking cigarettes after his first child was born. His amazing determination earns him the title as the best family man ever and we couldn’t agree more!

The man promised not to touch another cigarette on the day his first child was born because he wanted to provide a healthy environment for his newborn baby. Not only that, but the father also decided to stop his unhealthy smoking habit because he wanted to be a worthy role model that his child can look up to in the future.

“I would save up all the money that I would otherwise use for buying cigarettes.”

“Every time when the addiction kicks in, I would put away NT$50 (equals to $1.63). Now, I habitually stash away NT$50 whenever I get them,” told the father recalling his effort to quit smoking.

From the picture posted on his social media, the father showed a table full of NT$50 coins which he saved in a year.

After decided to stay smoke-free for quite some time, the man noticed positive changes in his health. The family man also plans to use all the money he saves to bring his wife and his kid for a holiday!

He also added that he will still decide to quit smoking even if it won’t save him any money because health is priceless and way more important. You need to be healthy to be able to raise your kid well.

He will definitely be a great father!