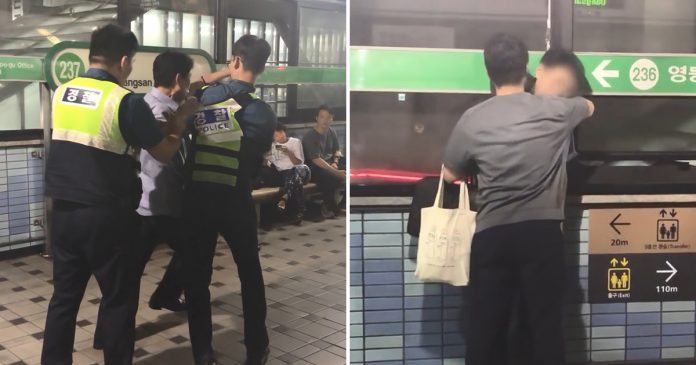 A lot of people usually avoid drunks as they tend to act aggressively and out of control. However, this young man in Dangsan station, South Korea is gaining attention for his way in helping a drunk man calm down.

The incident was said to happen in November last year, but it recently resurfaced and gains a lot of attention from the online community. In the short video with a duration of 45 seconds that was probably recorded by another passerby, two police officers were seen having a hard time calming a late forty-year-old drunk man.

The police officers struggled to calm down the drunk man.

While the drunk man uttered some inaudible words angrily, the police officers looked like they were trying to stop him from going somewhere and telling him to stop. However, the drunk man still sounded angry and didn’t seem like he will calm down anytime soon.

Looking at the struggling police officers, a young man sitting nearby suddenly stand up and approached the drunk man. He suddenly hugged the angry drunk man and politely telling him to stop. He continues to hug him and take him to the wall. After the hug, the drunk man suddenly calmed down in just a few seconds.

The young man suddenly approached the police officers and the drunk man.

Even though the drunk man continued to utter angry words, he was no longer acting aggressively. Thanks to the kind man that was able to calm him down, the situation at the subway station is peaceful again.

A lot of people watching the video are impressed with how the kind young man handled the situation and can’t help to feel his compassion after watching it. Some people also emphasis that comforting actions and sympathy are definitely far more superior compared to physical strength after watching the heartwarming clip.

His hug calmed him down in a matter of seconds.

Maybe we can try this method when we need to calm down a drunk friend later!