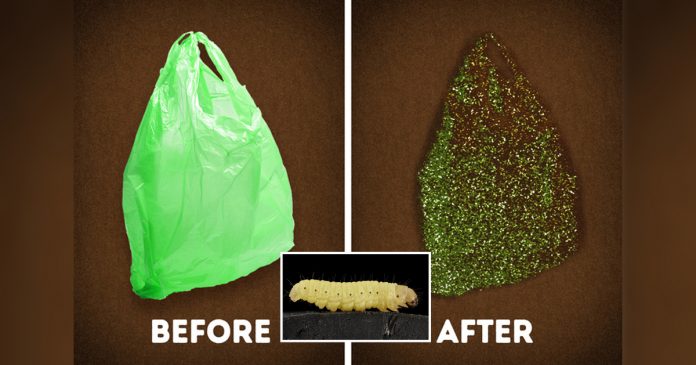 Scientists have discovered a miracle worm which eats plastic and could reduce the damaging effects of plastic pollution which is slowly killing planet.

The consequences of plastic pollution are disastrous—every year, over one million poor marine animals die because of the amount of plastic in our oceans.

And we use a crazy amount of plastic every day—every minute, a whopping 2 million plastic bags are used every minute. Yes, you read that right.

But recently, the world has become more aware of the harm plastic pollution can cause.

While scientists were searching for a solution to the problem, they made an unexpected discovery.

They found a tiny, yet extremely powerful worm which can help to tidy our world from the plastic which discarded carelessly into our oceans.

Waxworms, which are the caterpillar larvae of wax moths, may hold the key to biodegrading plastic and saving our planet.

The humble creature’s gifts were discovered by accident by scientist and beekeeper Federica Bertocchini, whose beehives were filled with waxworms.

One day, she decided to give her beehives a good old clean, and put the waxworms in a plastic bag.

Moments later, she observed that “they were all crawling around my place and the plastic bag was riddled with holes.”

Intrigued as to whether they were breaking down the plastic chemically or just chewing it, she decided to test it with a group of researchers.

They took some waxworms, ground them up, and smeared the paste on a plastic bag—and after 40 minutes holes started to appear again!

“So it had to be something chemical that was going on and not a physical breakdown,” scientist Christopher Howe told NPR.

The group of scientists think there is a special enzyme in the worms which break down plastic.

Now, they just need to figure out what the enzyme is and the waxworm’s digestive process.

Now we’re one step closer to saving the marine animals most likely to die from our plastic trash, such as…