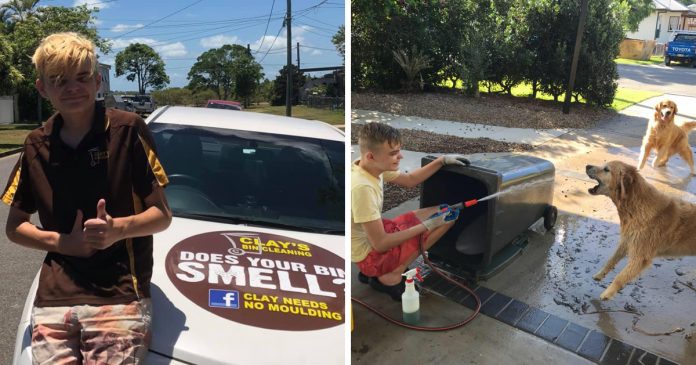 An Australian schoolboy who suffers from autism and was turned down from dozens of job posts, is making some serious cash after starting his own bin cleaning business.

17-year-old Clay Lewis decided not to let his disability get in the way of his goals, and started ‘Clay’s Bin Cleaning’ more than a year ago.

Since then, he has raked in over $6,000, has more than 70 clients and has even had to hire three more employees to help him out!

Clay, who was diagnosed with autism when he was two, said his business has increased his confidence and that he loves “getting cash”.

Clay charges his customers $10 to clean each wheelie bin and $5 for each additional bin.

He is really serious about his work!

His mom, Laura Lewis, helped him create his business after he was turned down from dozens of job applications.

“Clay has been looking for after school work for nearly two years with no success,” she wrote on his business’ official website.

“Sadly some people only see a disability rather than focus on ability.My husband, Warren, and I have learned not to put limitations on Clay because he always without fail exceeds them,” she aded.

“Because he speaks differently than other people, employers have unfair assumptions based on first impressions,’ Laura told Daily Mail Australia.

“If Clay had a job interview today, I can guarantee you he won’t get a job.

“They don’t know he has a great work ethic, he is very loyal and very diligent.

“If people are given chances, their self-confidence will improve,” she explained.

He thinks about the environment too and only uses non-toxic and biodegradable product to clean the bins!

Clay is so busy, that his family have to use an app to manage the number of bookings.

His venture is going well, he’s already thought of future opportunities, and might expand to wash driveways too.

But for now, he’s keen to save a little more and plan a hard-earned trip to Dubai to watch the Formula 1 car racing championships!