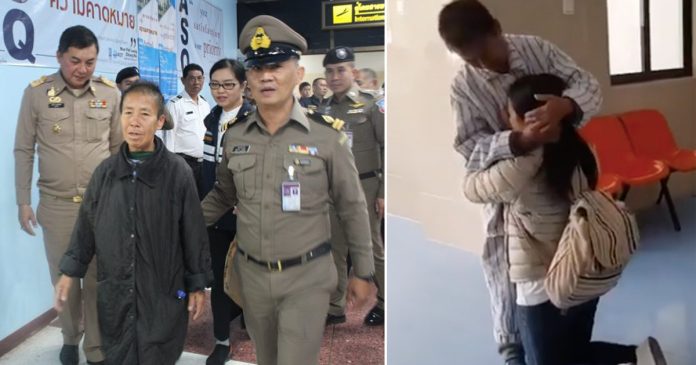 A 59-year-old Thai woman with dementia, who went missing last June after visiting her son close by, was found in Kunming, China late January—she ended up walking over 600km (370 miles)! When she reunites with her daughter, they can’t stop crying and hugging each other.

Kaewmanee Arjaw, from the ethnic Akha hill-tribe, left her Chiang Rai home one day, and never came back.

“I went to see my son… I met him, then I kept walking,” she said after she was discovered with her Thai ID card 640km away in China’s southern city of Kunming.

Her daughter Suchada Arjor, 35, was extremely worried about her and filed a missing person report on June 12.

She had almost lost all hope and thought she would never see her again!

As a few places border China, nobody is quite sure the exact path her mom took to get to China.

Kaewmanee could have walked through either Laos…

But she told officers she had walked all the way and survived with the little money she had by asking stall owners for some food during her long trek.

Speaking to AFP, Col. Aekkorn Butsabarbodin, of Chiang Rai immigration police said, “She told officials she went there by foot, she kept walking, asking for food from stalls along the way.”

She was found eight months later by Kunming police officers.

According to officials, Kaewmanee was found walking down a random highway in the area and was taken to a mental hospital.

Suchada couldn’t believe the news and was heartbroken that she couldn’t afford a flight to see her mom.

But then some Chiang Rai immigration officers decided to do the most amazing thing—they helped to fund the trip to bring her mom home on “humanitarian grounds”.

And when they reunite, it’s the most heartwarming scene ever.

Suchada gets on her knees and hugs her mom tightly while sobbing, and her mom comforts her by stroking her hair.

“When I asked her questions, she could answer some, but no details as to how she became lost and where she went.”

Suchada and her mom have such a special bond, and we hope they’ll never be apart again!

Watch their emotional reunion in the video below: