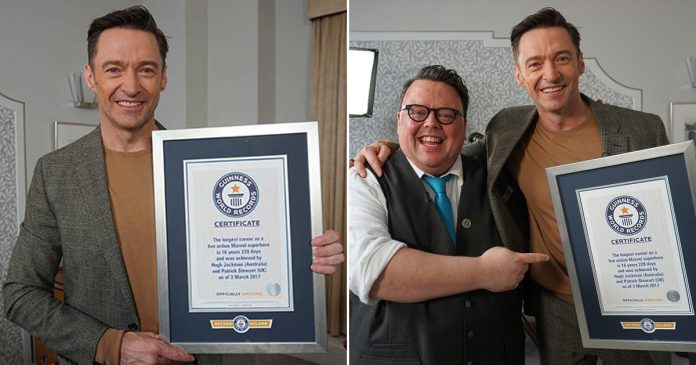 Actor Hugh Jackman now has another achievement to make not just fellow actors but the entire world jealous of him.

The Australian actor is recently awarded by Guinness World Records as an official world record holder for the longest career as a live-action Marvel superhero.

Jackman received the award in a surprise presentation on This Morning as an acknowledgment of his 16-year long career as Wolverine.

It's been a lifelong dream of @RealHughJackman's to become a world record holder, and today we've confirmed he's officially amazing with his very own @GWR title!

We put @AlisonHammond2 in charge of the celebrations, and she didn't disappoint! ? pic.twitter.com/LMuvn23v4Z

The Guinness World Record also meant that Jackman has finally fulfilled his childhood dream. “When I was a kid, the Guinness Book of Records was it,” he said.

However, he failed his attempt.

Nevertheless, he finally managed to get his name on the long list of Guinness World Records in his third attempt!

Welcome to the family, @RealHughJackman. Congratulations on your record-breaking @Marvel career as Wolverine. pic.twitter.com/p59RjWxQT1

He also shares the same record with Sir Patrick Stewart who plays Professor Charles Xavier as both the stars made their debut as Marvel superheroes in X-Men (2000) and in their recent appearance in Logan (2017).

Editor-in-Chief of Guinness World Records, Craig Glenday presented the award to Jackman and knew how excited the actor was to receive the award.

“When I did make my surprise entrance, you could see that Hugh was genuinely thrilled to hear the news and receive the certificate,” Glenday said.

Of course, the actor showed his excitement with a hilarious comment after the presentation. “That’s it, I’ve made it. This is why I got into showbiz, thank you,” Jackman said.