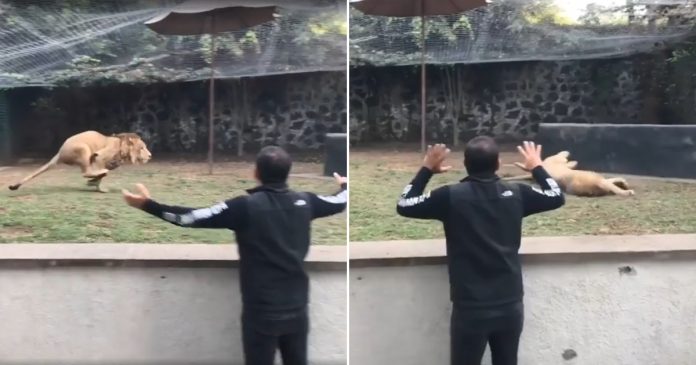 Heartwarming footage of a grown lion running towards his owner and savior when he calls his name proves that love truly knows no bounds!

The lion, named Lovey Dovey, was taken in by Eduardo Serio to his non-profit organization Black Jaguar-White Tiger four years ago.

When Lovey Dovey first arrived, he was in really bad health.

So Eduardo did everything he could to make him a healthy and happy lion again—and their bond really shows!

“Our mission is to rescue Big Felines from cruel circumstances and provide them with the best lifestyle possible.

“A life governed by LOVE and RESPECT. Our mission is also to educate others to respect all living beings and to treat them with both love and kindness,” the organization’s website reads.

Since 2015, it has rescued over 650 animals from different species. How amazing!

Eduardo gave Lovey Dovey medicine to nurse him back to good health.

In the adorable clip, Lovey Dovey can be seen rushing straight out towards a grassy area.

But as soon as Eduardo calls his name, he trips on his own paws and rushes towards him to play with him. While most people think lions are dangerous animals, the bond between the pair proves how much love and respect can be formed between animals and humans!

They have the best bond ever.

“They told me countless times that my Lovey Dovey would not have a normal life. I just nodded in acceptance to avoid wasting energy, but my whole being said “Hell no”.

“This picture must be from around a year ago. Now, my boy is super healthy and huge, living the normal life of a Lion in Mexico. Well, as normal as that can be,” Eduardo wrote on Instagram.

Look what a difference a few years and a life full of love makes!

Watch the adorable clip of the duo below!

Viral video shows 4 lions strolling along a road in South...