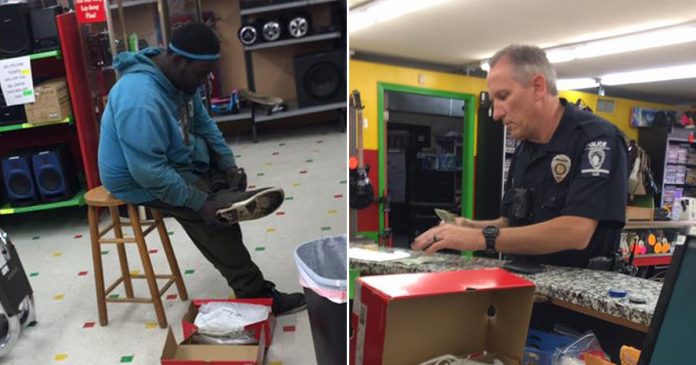 Alicia Danielle was working at a pawn shop when she had a customer wanting to buy a pair of shoes one day. Unfortunately, his card was getting declined when he wanted to buy the shoes so he went out of the shop but startling everyone when he came back with a police officer.

Danielle said that she can see how much the man wanted the shoes because the one he had on his feet were literally started to fall off. Even though his card was declined, the man refused to give up and returned to the shop 15 minutes later—with a police officer.

Looking at that situation, Danielle and her co-worker asked the police officer what seems to be the problem.

“Is there a problem, officer?” recalled Danielle on her words that moment.

“No, there’s no problem but if you still have the shoes I’d like to go ahead and buy them,” replied the police officer.

Appreciating the officer’s kind act, Danielle knew that she had to share the story with the world.

The heartwarming moment the police officer helped the man to buy his shoes.

So this guy comes in to buy a pair of shoes because his are literally falling off. Anyway his card wouldn’t work so he…

“I’m just sharing this because there is constant hate, mistrust, and division in the world we live in today. We still have so far to go, but I promise you small acts of kindness like this are what’s going to rebuild trust and faith in our communities.”

A lot of people were touched after reading Danielle’s story and praised the kind police officer for his random act of kindness.

Thanks for not letting this go unnoticed, Danielle!