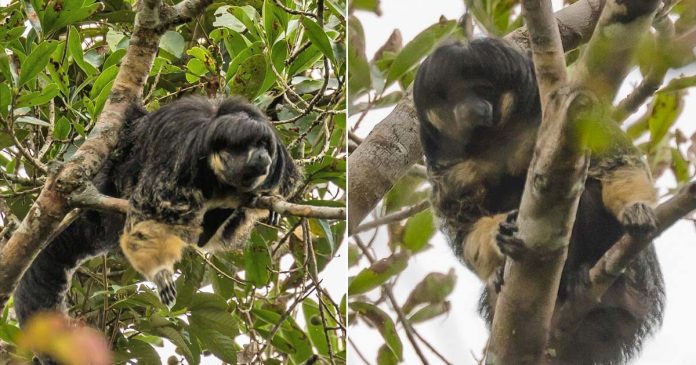 Looking at the unexplored jungles and forests that we have, it is undeniable that there are still many kinds of animal that we humans have never seen before. Recently, an expedition by researchers in west Amazon found a species of monkey that was last seen 80 years ago.

With the name Vanzolini saki, the monkey was first seen by environmentalist, Alfonzo Olallain in 1936 along the river of Eiru, Ecuador—that was the first and the last time people heard of that monkey until today.

It has black and golden fur.

Saki experts and head of the expedition, Dr. Laura Marsh spent 10 years updating the Saki monkeys’ taxonomy and earlier this year, Dr. Marsh with seven primatologists from Brazil, Mexico, Colombia, and America, together with a driver, drone operator, and photographer started their expedition last February looking for the missing Vanzolini saki.

The three months Amazon Houseboat expedition was the first study made focusing on primate animals and other mammals living in the area near the water. The main purpose was to find mysterious Vanzolini saki monkeys, monkeys with long fluffy tail and golden fur on its legs and feet.

A survey made in 1956 succeeded on getting a specimen of the dead Vanzolini saki, but this is the first time in 80 years the world is witnessing a real Vanzolini saki.

It has such a fluffy fur and long tail.

Thanks to their endless effort, the team managed to find the monkeys on the fourth day. An experienced field guide Ivan Batista has reportedly seen a black monkey jumping from branch to another branch, and that was their first discovery to many more missing monkey species.

There are locals hunting for the monkeys as food source.

“From what we have seen, if there’s no control on the animal hunting, the status of Saki monkeys conservation will be critical. A lot of monkeys became a food source for the locals when they went out hunting near Eiru river and Liberdade,” told Dr. Marsh.

Say no to animal hunting or we will never see these elusive monkeys anymore in near future!