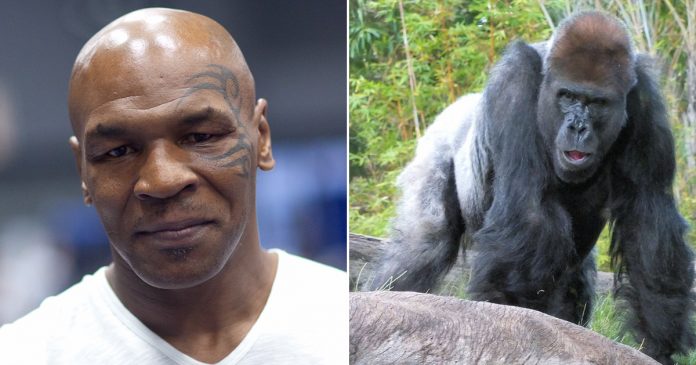 We’re not even surprised— after all, Mike is an American boxing legend, and became the youngest boxer to win a heavyweight title at just 20 years old!

The 52-year-old is also an animal lover and has an obsession for exotic animals and pets—especially tigers.

He infamously kept several Bengal tigers as pets at his mansion home, allegedly paying $70,000 for each of them!

And that didn’t even include their daily expenses such as food and maintaining their personal living spaces.

One of his kitties was even featured in the 2009 Hangover movie.

So we’re not shocked at the reports Mike wanted to deck the silverback gorilla.

Luckily for Mike, the zoo-keeper said no to the offer, even after Mike said he wanted to “smash that silverback’s snotbox”.

It all apparently happened when Mike was on a date at the zoo with his then-wife Robin Givens.

They were enjoying a romantic and peaceful walk alongside the zoo animals, when he noticed a certain gorilla bullying the others.

“I paid a worker at New York’s zoo to re-open it just for me and Robin. When we got to the gorilla cage there was one big silverback gorilla there just bullying all the other gorillas.

“They were so powerful but their eyes were like an innocent infant. I offered the attendant $10,000 to open the cage and let smash that silverback’s snotbox! He declined,” Mike told The Sun.

It’s probably a good thing the zookeeper rejected his bribe—as silverback gorillas have fangs and are usually heavier than the average fighter.

Don’t mess with him!

And they’re fast! Their average speed can go up to 25mph—that’s just 2mph below Usain Bolt, in case you’re wondering.

So there would be no escape…

Either way, it shows just how fearless Mike Tyson is!