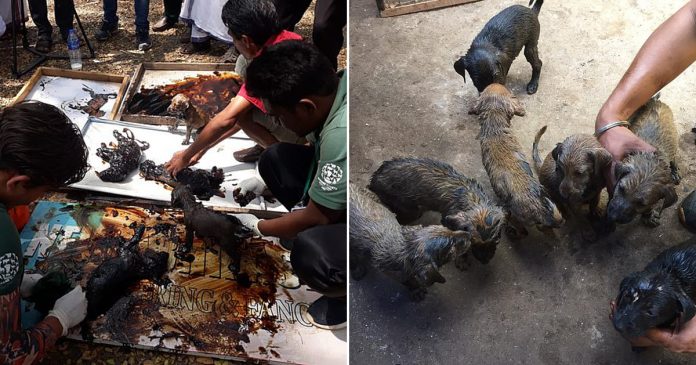 Thanks to the kind volunteers, a family of eight stray puppies in Tirur, south-west India was rescued after they ended up covered in toxic tar. A barrel of tar has collapsed over the family of dogs, the puppies were struggling to breathe after eight hours stuck in the toxic tar.

When they were found on the streets of Tirur in India’s Kerala state, the puppies were covered in thick black tar from head to tail. It is also believed that the tar barrel collapsed on top of them while they were sleeping making it impossible for them to run out of it.

The puppy was in a very bad condition.

Looking at the poor puppies in the sticky mess, a local animal lover called Mr. Jaleel contacted animal rescuers from Humane Society International India. The team spends hours cleaning each and every little dog with vegetable oil so that the tar will wear off.

The team struggles to clean the puppies.

“This was such an awesome community effort because there is absolutely no doubt that these puppies would have died had the local people not come to their rescue. These tiny puppies had been trapped in the tar for many hours, and were exhausted as well as overwhelmed by the noxious fumes,” said Sally Varma of Humane Society International India.

They used vegetable oil to clean the black toxic tar from the puppies.

The puppy looking very weak after hours in the toxic tar.

“They had tar covering their eyes, and in their noses and mouths, so they would surely have perished were it not for these compassionate people. HSI’s animal welfare officers refused to give up and worked tirelessly to remove the tar. It was thrilling to see these sweet pups come back to life and suckle from their mother after their ordeal.”

We can finally see their own coat after the cleaning.

They can move freely too.

Thanks to the team’s determination and effort, the puppies were eventually cleaned up and could be reunited with their mother.

The puppies will be old enough for vaccination in two weeks time and they will be returned to Tirur after sterilized by the HSI team.