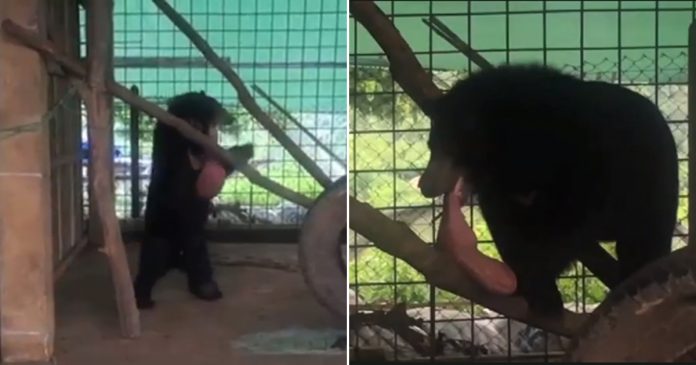 An Asian black bear named Nyan Htoo and his brother were rescued in Myanmar when they were still a cub by monks at a monastery. However, not long after, Nyan Htoo’s tongue began to swell from an unknown disease.

In spite of his rare condition, Nyan Htoo’s caretakers said that he remained playful—just like his name Nyan Htoo, which means ‘bright’. The big bear also continued to wrestle with his brother.

The Asian black bear’s tongue began to swell from an unknown disease.

The Asian black bear underwent his first operation in 2016 but the swelling recurred and worsened—making it hard for Nyan Htoo to lead a normal life like any other bears. By 2017, Nyan Htoo’s tongue was dragging on the floor, causing the pitiful bear painful injuries.

Nyan Htoo is having a hard time walking with his swollen tongue.

The tongue causes injuries to Nyan Htoo while doing a normal activity such as climbing trees.

Looking at the worsened condition of the bear, a veterinary surgeon Heather Bacon of the University of Edinburgh in the UK worked with Caroline Nelson of the Animals Asia Bear Rescue Centre in Vietnam and Romain Pizzi of Wildlife Surgery International to remove three kilograms of tissue from Nyan Htoo’s tongue. The procedure took four hours to be completed.

“Thanks to the enthusiasm and compassion of all involved in this uniquely collaborative project, we have been able to make a tangible improvement in the quality of Nyan Htoo’s life, and hope to continue our work in Myanmar to promote improvements in animal welfare and veterinary training,” said Bacon.

Nyan Htoo feeling a lot better after the surgery!

Upon further examination, Nelson and team believed that the reason of swelling was caused by a mosquito-transmitted infection called elephantiasis. This unusual medical condition never before seen in bears and is normally seen in humans only.

“This was a really unusual medical condition—never before seen in any species of bear—but we weren’t about to give up on Nyan Htoo. Now he will be able to eat much more comfortably, sleep in more natural positions and move more freely for the rest of his life,” Nelson added.