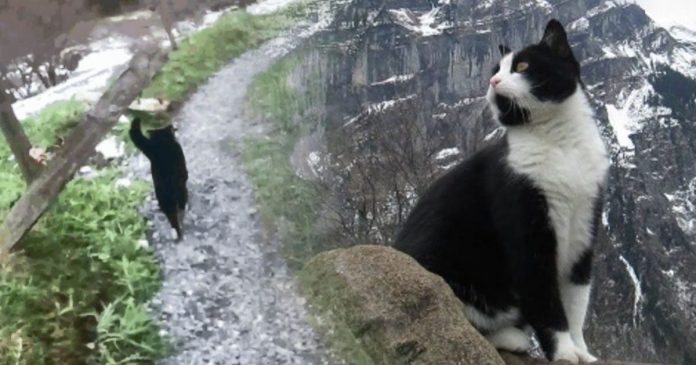 Some say that cats are aloof creatures, unlike their friendlier, more sociable and outgoing counterpart, dogs. However, this heartwarming tale from the Swiss Alps may change your perspective about cats forever.

Reddit user, sc4s2cg shared the details about his hiking trip when he accidentally sprained his ankle and was lost in the middle of a town called Gimmelwald in the Swiss Alps.

The man who is from Hungary was exploring the mountains in Gimmelwald when he sprained his ankle and wanted to find the way back to his hostel and came across a kind-hearted feline.

“Gimmelwald is a tiny, tiny stunningly beautiful village [and ] I actually got “lost” in the surrounding mountains,” the man wrote on Reddit.

“It was the end of ski season when I got to [the alpine village of] Lauterbrunnen, so the lifts weren’t working and some of the trails were closed,” he continued.

“So I followed a roundabout trail up the mountain, and then followed those ski lifts further, eventually getting to the top, where I decided to follow a train track into the middle of a totally empty town [called] Gimmelwald.”

However, the trail that was on his map was closed. Luckily, a fluffy and friendly feline was nearby when he was resting.

“[The cat] was just wandering around, [then] found me while I was resting from a hike,” the man wrote.

“Then he was walking and kept looking at me to follow [and] led me straight to the path that would take me back down to the valley.”

The Hungarian man also shared a video of him following the cat closely from behind as she led the way into the village. The video also shows him bidding farewell to the kind cat as they parted ways.

“Till we see each other again,” the man said to the cat.

His post about the heartwarming encounter quickly went viral on Reddit and other social media platforms as other users shared their experience that they had met the cat from Gimmelwald as well.

It turned out that the friendly cat was owned by a couple who run a hostel in the village and sometimes joined tourists on their hiking trip up the mountainside.

Touching moments between animals and humans that show small and sincere...