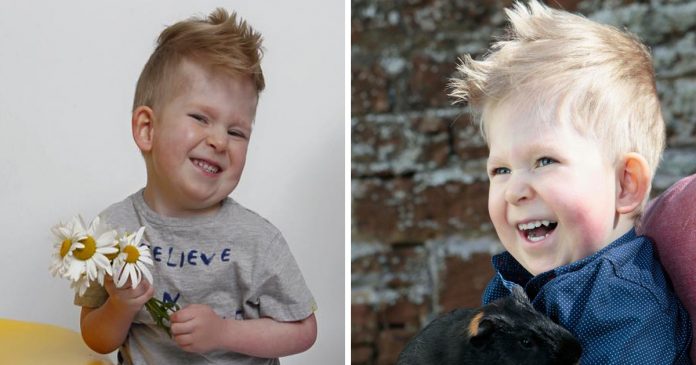 Shelly Wall and husband Rob were expecting a little boy when she became pregnant in 2011. Unfortunately, they received devastating news when she was only three months into her pregnancy.

Noah was even diagnosed to have only 2% of brain tissues.

Doctors predicted that Noah would either die before he was born or at birth. Both Shelly and Rob were strongly advised by doctors to abort Noah since he had very small percentage to survive.

However, Shelly and Rob refused to abort Noah. “We were offered termination five times,” Rob Wall said in the documentary, “The Boy Without a Brain.”

“It was never an option for us. To me, we wanted to give Noah that chance of life,” he said.

The couple was planning for a funeral for Noah as the doctors told them that Noah would not make it to birth. However, on March 6, 2012, Noah defied all odds.

“The first thing we heard when he was born was him taking a breath and then crying, which was unbelievable,” Shelly said.

Noah was found paralyzed from the chest down but Shelly and Rob were more than grateful that their baby boy survived.

Just after he was born, Noah had to undergo surgery to clear the cerebrospinal fluid which caused pressure on his brain.

He was later allowed to go home but had to return to the hospital numerous times due to other health complications.

Nevertheless, Noah remained strong and proved to the doctors that he could defy all odds when he showed everyone that he could sing, talk, and sit straight up.

Doctors even found that his brain has expanded and his brain cells multiplied unlike when he was born.

A brain scan that was taken when he was three years old shows his brain has developed to 80% of a normal brain.

“[…] to hear his brain’s almost back to normal is beyond belief,” Shelly said.

“Rob and I broke down when we heard the news. It was like a dream. I’ve never known anything like it.

Even the consultants were in tears. Every time we see the doctors, they just shake their head. They’re just amazed at what he can do.”

Now, thanks to his rapid progress, Noah is helping other children who have similar conditions through his brain scans. His scans are used in studies regarding spina bifida.

Doctors have confirmed that Noah’s brain is now nearly fully-functional and that he could develop like other typical children.

The future is still uncertain for this little boy but Noah and his family believed he would be able to grow up healthy as miracles do happen.

A Malaysian smoker shares his incredible experience on how he managed...