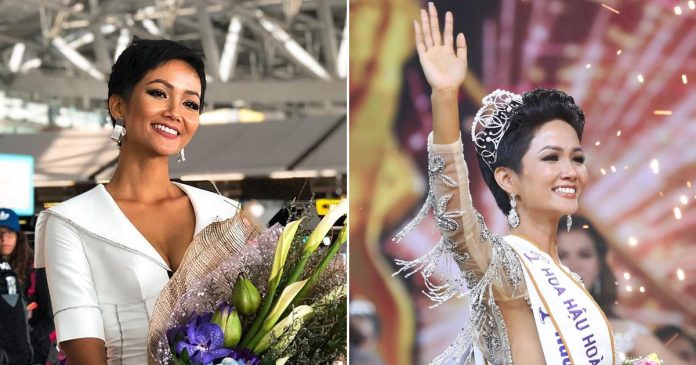 Meet the gorgeous and ravishing representative from Vietnam in Miss Universe 2018 who challenged the typical beauty standards in beauty pageants with her chic pixie haircut and strong stand on girls’ rights to education.

Miss Vietnam 2018, H’Hen Nie, undeniably made an outstanding presence in Miss Universe 2018 with her flawless tanned skin and captivating beauty.

Nevertheless, beyond her stunning short hair and statuesque figure, Nie was notable for being the only Vietnamese who is from an ethnic minority group to ever represent Vietnam in the competition.

Nie descended from the Rade group which makes up only 5% of the total population in Vietnam.

According to the customs of the Rade community, it is common for young girls to get married at the age as young as 14 and to forgo their education and focuses on their marriage.

However, Nie chose to follow her dreams and refused to marry early.

Furthermore, she also had to hustle in order to pay for her education by working several odd jobs such as a maid, tutor, leaflet deliverer, and model.

“I could not possibly get a husband at that point in time because I had to follow my dreams,” Nie said.

Proving that even those who came from a humble background can succeed, Nie went on to compete in Miss Vietnam which saw her being named as Miss Vietnam on January 6, 2018.

She then made it through Miss Universe 2018 and later finished in the top 5.

In spite of being involved in controversial comments made by Miss USA who was accused of mocking Nie and Miss Cambodia, Nat Rern for not speaking English during the Miss Universe competition, Nie responded with grace and kindness.

“When she knew about my difficulties with (the English) language, she took an interest and showed me love,” Nie told CNN.

“That’s why she knows about that. Thank you, Miss USA, for taking care of me, showing me love and helping me recently.”

Not only that, she also donated all of her prize money from the pageant to build a library in her community.

Now, Nie is using her influence and popularity to raise education fundings for the underprivileged girls across the world.