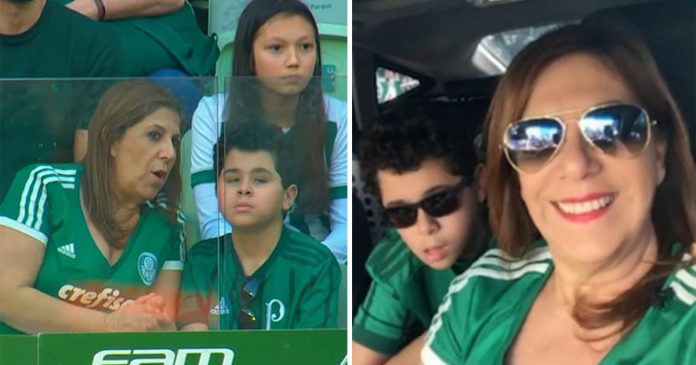 A mother would do anything for her child, even if that means she can’t enjoy the football game herself. Silvia Grecco is a passionate Brazilian football fan. Just like the mother, her son Nickollas also loves to ‘watch’ football.

Nickollas is blind and autistic, but that didn’t stop Grecco from bringing him to games to watch his team Palmeiras in Sao Paulo, Brazil. To make sure her son enjoys the game as much as she would, Grecco narrates the games to Nickollas and describes every single detail of what is happening on the field.

Grecco’s narrating the game to her son.

After the moment Grecco narrating the games, relaying the players’ every move on the pitch to her blind and autistic son was spotted on television in Sao Paulo last year, the mother-son duo become minor celebrities. They have been featured on various Brazilian TV programs and even visited a Palmeiras training session.

Both mother and son dressed in the football shirts of their favorite Sao Paulo team—Palmerias.

“I describe details—this player is wearing short sleeves, the color of their football boots, hair color. My narrating is something of my emotions. I’m not a professional. Everything I see and feel, I tell him, even when I need to curse the referee!” told Grecco to AFP during a recent game between Palmeiras and Botafogo de Ribeirao Preto.

Grecco revealed that she got her son to support her favorite team by involving his idol, Brazilian international football player Neymar.

Grecco and her son were also lucky enough to meet the Paris Saint-Germain player at an event in Sao Paulo.

“Neymar lifted him on his shoulders and he passed his hand through Neymar’s hair, it was a big moment! So I asked Neymar what team he used to support as a child, and he said he was a Palmeiras fan! So I said ‘Do you see, Nickollas? Your mother, your player. I think your team should be Palmeiras!’.”

Nickollas enjoying the game with his mother’s narration.

What a wonderful parent!