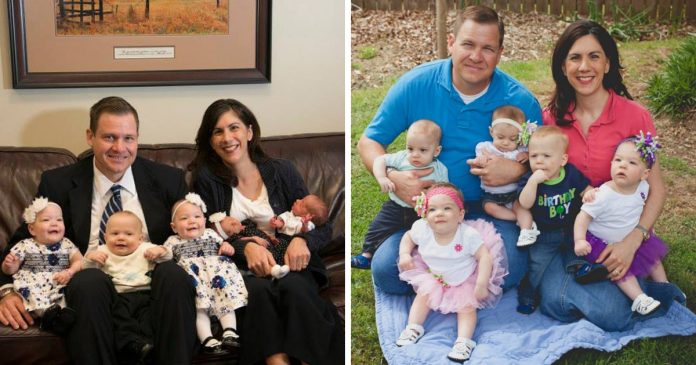 When Sarah and Andy Justice from Oklahoma struggled to conceive, they decided on adoption as IVF would cost them up to $60,000. With just 10 percent chances of getting pregnant, the cost was way too expensive.

Sarah and Andy were finally matched with a soon-to-be mother but surprised upon finding out that the birth mother was expecting not one or two, but three babies instead. This is a piece of good news for the couple because they don’t have to go through another adoption process again in the future.

“Wow! This is great. It’s everything we wanted.”

Sarah and Andy struggle to conceive and decided on adoption.

The beautiful babies were finally born and named as Joel, Hannah and Elizabeth.

The triplets were born premature but healthy.

When the babies are still in neonatal intensive care, Sarah and Andy had their second surprise. Sarah was pregnant and did a sonogram two months later to find out the sex of her baby. Feeling excited, Sarah called her husband to inform him.

Sarah also said that they would never give up the triplets even when they have their own biological children.

Andy believes that the twins may not have even come along had the adoption not panned out so well and taken away the stress they’d been under. The couple’s twins were born healthy and named as Abigail and Andrew.

The couple admitted that they’re not having much sleep and didn’t really sit down much ever since, but very thankful that they’ve been getting a lot of help from their tight-knit community. They’re also blessed to receive donated diapers for the babies as they’re going through 40 to 50 diapers a day or 300 a week.

The twins were born and joined their triplets sisters.

In less than a year, Sarah and Andy are now the parents of 5.

With the triplets and the twins, it feels like they’re having quintuplets!