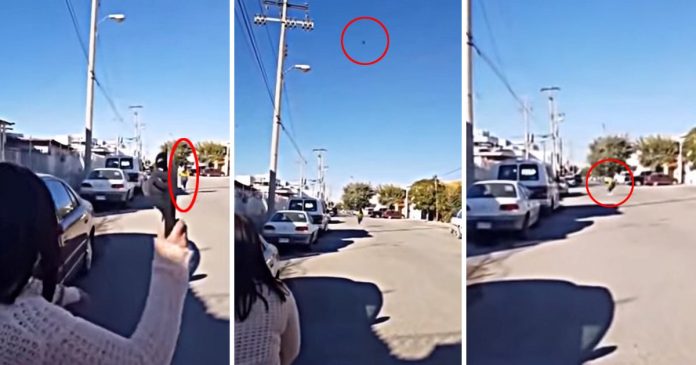 You had a family argument with your daughter, but she ran awaysuddenly. That wouldn’t solve the problem but you don’t have that stamina to catch up with her. This mother had the best solution and it includes a flip flop.

When a furious mother in Mexico was seen trying to catch her on-the-run daughter, a random guy recorded the moment an unidentified lady entering the road as her daughter runs away into a distant.

The mother taking off her flip flop.

The mother took off her flip flop and throw it to her daughter’s direction. Insanely, the mother’s long-range shoe shot actually hit right on the fleeing daughter’s head as she was seen falling on the road in the video.

The daughter is already quite far but that didn’t stop her from throwing that!

The flip flop perfectly lands on top of her head as the daughter was seen falling on the ground.

At the end of 14 seconds video shared on Twitter, the mother was seen laughing her head off near a car, probably wasn’t expecting that it landed right on her aim.

The amazing clip was originally posted on Twitter where it quickly garnered over 1.3million views.