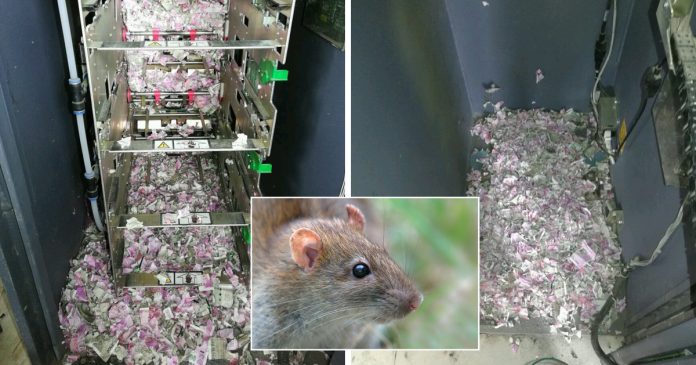 Money is so valuable that sometimes we even skip meals to put aside for some savings. Well, this one rat didn’t seem to care about that because it made a home of a State Bank of India ATM and claimed all the money in it.

Happened in the town of Tinsukia, India, the rat destroyed $17,662 worth of Indian rupees. It was mentioned that the ATM machine had long been out of order and suddenly stopped dispensing money as well.

When the technician went to look at the machine, they basically found a rat net-made of money! The technician also found a no longer living rat inside the ATM probably drowned in money, literally.

The state inside of the ATM.

“We have started an investigation into this rare incident and will take measures to prevent a recurrence,” said the SBI branch manager, Chandan Sharma.

$42,685 worth of Indian rupees was reported to be successfully recovered without any harm done to it but the bank ATM’s CCTV cameras failed to recognize the rodent. With possession of 50,000 ATMs crosswise over India, the State Bank of India is trying their best to resolve the issue.

Fragments of notes found inside the ATM.

Make sure to take an initiative to quickly report a problematic ATM when you find one to avoid a serious lost like this one!

This cat species may be the most gorgeous and cutest cats...