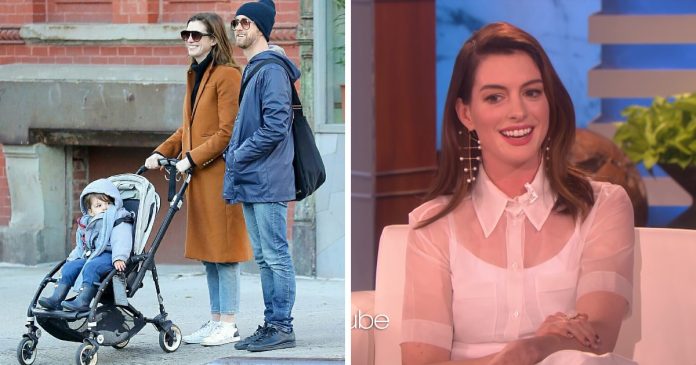 Didn’t want to be hung-over during his son morning school drop-offs, the actress Anne Hathaway revealed that she has decided to give up drinking alcohol for the next 18 years.

Hathaway and her husband welcomed their adorable son, Jonathan in April 2016. The 36-year-old Serenity star opened up to Ellen Degeneres about her decision to quit drinking because she doesn’t want to drink around her son.

“I quit drinking back in October, for 18 years. I’m going to stop drinking while my son is in my house just because I don’t totally love the way I do it, and he’s getting to an age where he really does need me all the time in the morning.”

Hathaway opened up to Ellen about taking her drinking on hiatus.

“I did one school run one day where I dropped him off at school. I wasn’t driving, but I was hung-over and that was enough for me. I didn’t love that one,” admitted Hathaway.

That was not the only incident with drinking for Hathaway as the beautiful actress recalled the night she can’t even remember the moment while shooting Serenity with co-star Matthew McConaughey on the island of Mauritius.

Hathaway had a series of hung-over moments going on.

“We drank the night away, and then I had to go to a meeting with Steven Knight, our director, the next day, and I was just kinda stumbling in with one eye open and I was trying to convince him about certain things about my character.”

“And at the end of it, I said, ‘Listen, I have a confession. I was hung-over the entire time’. And he just goes, ‘Oh, really? I couldn’t tell’. Then two days later we had another meeting and I showed up and he said, ‘Oh, now I can tell’.”

Hathaway with her small family.

Hathaway made a wise decision to consider abstaining from drinking alcohol when she’s on parenting duty as a survey by the University of Michigan Medical School survey found out that one in twelve parents admitted to being too affected by alcohol to carry out their regular parenting duties the next day.