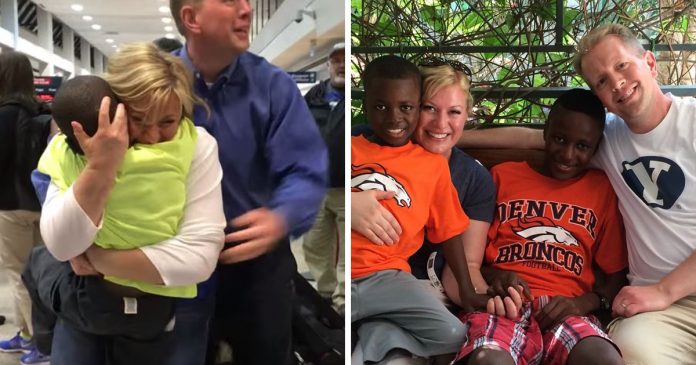 Adoption procedures are not easy, especially if the child and couple are of different nationalities. Different countries simply have different procedures, which can take a while. This is a lesson that the Grovers had to take, and they endured it patiently.

James and Jennifer Grover began the adoption process for two brothers, Joseph, 14, and Bronson, 7, who were from the Democratic Republic of Congo. They went through every single procedure necessary including attending court hearings and had even become financially responsible for them; flying over to meet them several times.

However, a year into the adoption process and left to wait for the boys’ U.S. visas, they suddenly received a legal adoption decree by the Congolese government, suspending the issuance of exit letters that forbade Congolese children adopted by foreigners to leave the country.

The couple and their two sons.

The brothers, who suffered from Malaria then, were forced to stay in an orphanage with little food and no running water. “They were ours in every way,” Jennifer told TODAY. “I can’t describe the pain I was feeling during that period of limbo.”

After a painful three-year wait, Jennifer suddenly received an email from the State Department informing her that exit letters for her sons have been granted! A month later, the boys came home.

The beautiful reunion took place at Salt Lake City International Airport, Utah.  And as soon as 7-year-old Bronson laid his eyes on Jennifer, he yelled, “Mom!” and flung himself into her arms. All four of them burst into tears and held each other for a very long time.

Tight hugs all around.

James said that the moment he saw his two children, the anxiety and fear accumulated in the past three years disappeared instantly. “As I held my two new family members who came from afar, I felt whole. I felt no regrets.”

“I was expecting things to be difficult because of their age and the stark contrast in conditions,” she told US Magazine, “but I was very pleasantly surprised. All the kids have attached in every sense of the word. Last night they had leg wrestles and dance parties in the family room!”

Both brothers are now enrolled in school, with Joseph sharing most of his classes with his sister, Lauren. Joseph loves playing basketball in the family’s driveway, and he’s already learned to play guitar and ride a bike. Bronson is following in his brother’s footsteps, but Jennifer is giving him a bike with training wheels first.

Watch their beautiful reunion here below.