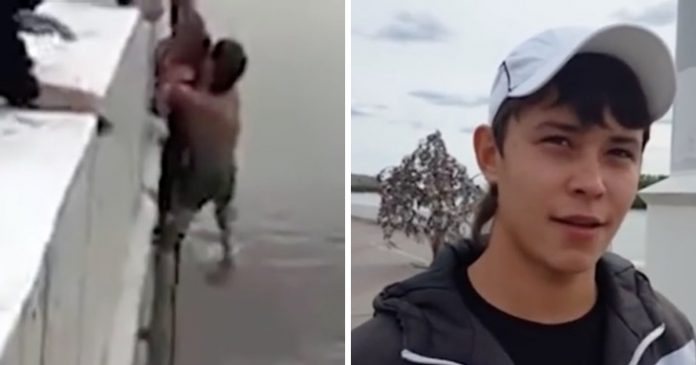 It is undeniable that even how careful we are, sometimes the unwanted would still happen. The Karpjuk family was on a trip to Irtysch River in Russia when the daughters fell into the water. Fortunately, a good Samaritan comes to the rescue and saves the day.

The girls’ father, Vyacheslav went to a store and parked the car nearby while her wife took care of a younger sibling.

Unfortunately, the 5 and 7-year-old girls went to the edge probably to get a better look of something in the river and fell into the ice cold water, as told by Trend Journal.

Shocked by the incident, Vyacheslav immediately jumped into the water to save his daughters. Both of the girls grabbed him so tightly making it hard for him to stay afloat.

People started to gather by the riverside and even threw ropes to Vyacheslav.

But he didn’t have the strength to hold both of his daughters while grabbing the rope.

Looking at this critical situation, a teenager suddenly appeared out of nowhere, tore his clothes and jumped into the icy water to save the family. Just in a few minutes, the teen managed to get the girls up on shore.

He suddenly jumped into the water to save complete strangers.

Despite being shocked by the teen’s brave act, the family was very thankful for his life-saving effort.

As the news spread, a local newspaper managed to get hold of the unknown hero and identify him as Sasha Yergin. It turned out that Yergin didn’t have an easy upbringing. He was raised by his grandmother as he had an absent father and an alcoholic mother.

Despite his rough upbringing, the teen made his mark by saving a family that is complete strangers to him.

Since the story went viral, several families offered to help him and his grandmother.