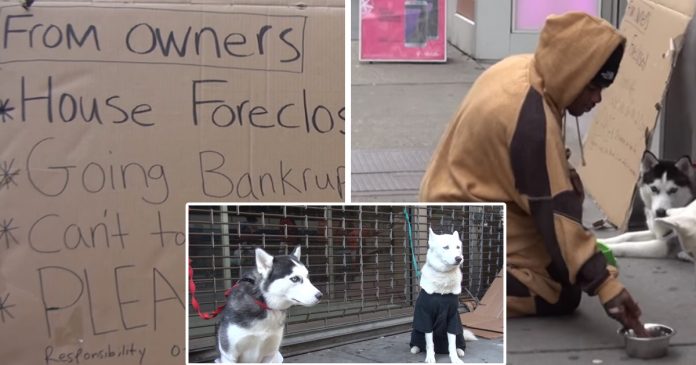 As the winter comes to its end, the weather is getting colder as the temperature falls below -6°C in New York City. Unfortunately, many homeless people still have to brace the cold weather on the streets, including these two abandoned huskies.

Seen in the YouTube video are two Huskies who are tied up on the streets and left abandoned in the freezing winter.

Luckily, the two dogs are not actually abandoned for good. They are just a big part of a social experiment conducted by YouTubers and filmmakers, Moe and Ethan.

The two decided to make a point about poverty and responsibilities of pet ownership in New York City to see if the public would be concerned with abandoned dogs.

So, they later set up cameras which were hidden from the public. Would anyone pet them or stop and help the dogs?

The two Huskies stayed quietly on the streets as their eyes followed the passersby along with a cardboard that says their owners went bankrupt and that their house was foreclosed.

Surprisingly, many of the passersby chose to ignore the two poor Huskies. One unknown man even harassed the dogs by spitting at them!

While many of the passersby ignored the Huskies completely, one man who appeared to be homeless slowly approached the freezing canines. He later gently petted the dogs and left

However, 10 minutes later, the homeless man showed up again and brought two dog bowls and some kibble to feed the Huskies!

Apparently, he made an effort to go to the store and bought some dog food just for the two ‘abandoned’ Huskies while many just simply ignored the dogs.

The man later explained that he knew exactly how it felt to be starving and helpless so it did not take him much time to think when he saw the two dogs left on their own on the street to help them.

In spite of him being homeless, the man still chose to help others with whatever he had including abandoned dogs.

Watch the full video of the social experiment.

24-year-old woman nearly lost her life and had her leg amputated...