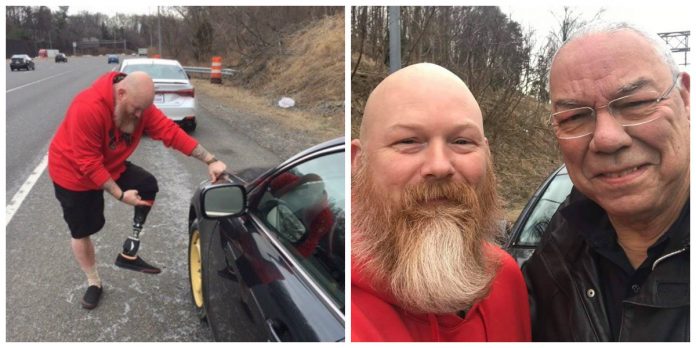 Former Secretary of State Colin Powell shared in his social media account of a heartwarming text conversation between him and a retired four-star Army general after he helped to change Powell’s flat tire in Maryland.

The 81-year-old Powell got a flat tire near Washington as he was heading to Walter Reed Military. He was just removing few bolts when a man in his car suddenly stopped near him.

“As I drove along Interstate 495 my left front tire blew out. I am a car guy and knew I could change it but it was cold outside and the lug bolts were very tight. I jacked the car up and got several of the bolts removed when a car suddenly pulled up in front of me.”

The kind man had an artificial leg.

“As the man got out of his car I could see that he had an artificial leg. He said he recognized me and wanted to help me. We chatted and I learned that he lost his leg in Afghanistan when he worked over there as a civilian employee. He grabbed the lug wrench and finished the job as I put the tools away. Then we both hurriedly headed off to appointments at Walter Reed. I hadn’t gotten his name or address but he did ask for a selfie.”

As both of them were in rush for appointments, Powell said that he couldn’t identify the identity of the kind man. Luckily, Powell received a text message from him later in the day and he was identified as Anthony Maggert.

The selfie they took together.

“Gen. Powell, I hope I never forget today because I’ll never forget reading your books. You were always an inspiration, a leader and statesman. After 33 years in the military you were the giant whose shoulders we stood upon to carry the torch to light the way and now it is tomorrow’s generation that must do the same,” write Maggert in his message to Powell.

Moved by the message he received, Powell thanks Anthony in his Facebook status and reminded all of us to always take care of each other.

“Thanks, Anthony. You touched my soul and reminded me about what this country is all about and why it is so great. Let’s stop screaming at each other. Let’s just take care of each other. You made my day.”

Yesterday was a reassuring day for me. I was on my way to Walter Reed Military Hospital for an exam. As I drove along…

This story definitely warmed my heart.