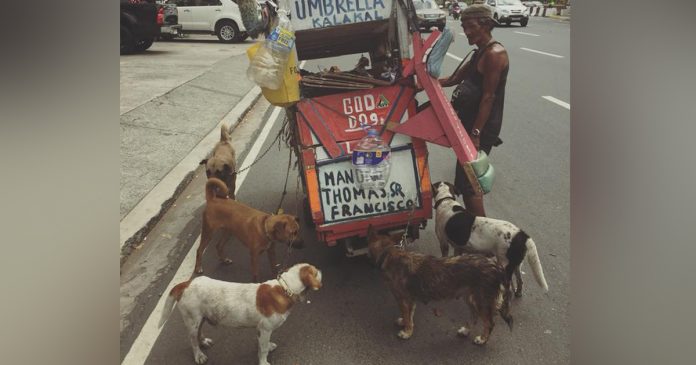 Animal lovers Mikki Ramos and his sister were driving on the streets of Manila, Philippines when they caught an unusual sight of a man with his pet dogs.

They chatted with the man briefly and was touched by this man’s unconditional love for his dogs, hence, they decided to help the man out.

“My sister and I were driving along Quezon Ave when we spotted an old man pushing a cart, and there were a lot of dogs accompanying him,” Ramos told When In Manila. “She and I were touched with what we saw so we thought of helping him because we also love animals, especially dogs.”

After pulling over, Ramos chatted with the man briefly and learned that he takes the dogs wherever he goes during the day. The man travels around to sell “junk” and the money he earns is used to buy food for himself and the stray dogs he has taken in.

Before parting ways with the man, Ramos took pictures of him and also gave him some “groceries, water, and dog food,” according to When In Manila.

In the evening, Ramos debated long and hard whether to post the photo of the man online or not. He kept thinking about the man and about what the dogs meant to him, and vice versa.

“These dogs, it didn’t matter whether their owner was rich or poor, what mattered was the owner’s love,” Ramos said. “It was obvious sight to see that the dogs love him back because he was the only one to really adopt them when they were left alone in the streets.”

“So if you see him on the street, give him dog food or water and talk to him because he has a nice story to tell,” Ramos wrote. “Dogs are our loyal companions whether we are rich or poor. Only your love matters to them.”

“I hope, more than anything else, people will not only be able to help him and the dogs but also to create an awareness to love animals—not to kill or abuse them but to make them your lifelong companion,” said Ramos. “Whenever a dog in our family dies, we all cry because dogs made us happy. They bring joy in our lives.”