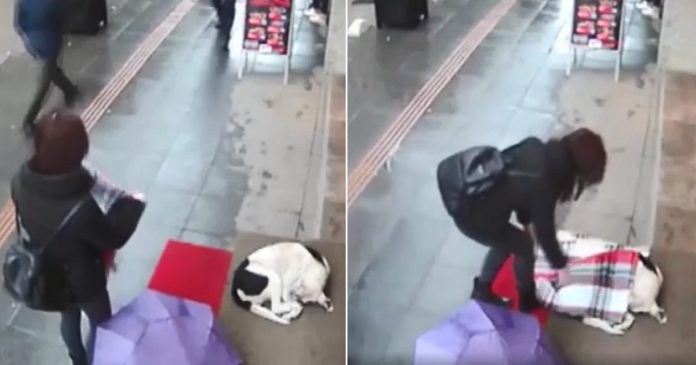 This kind woman provided warmth for a poor stray when it needed most and her kind act was captured by a security camera.

It was cold and rainy day in Zonguldak, Turkey when a customer was seen leaving a cafe. As she passes through the doorway, she notices a stray dog curled up in the cold and stop by it. Realized how bad the weather is even for her, the lady takes off her own scarf and put it on the dog.

The dog was just outside the cafe—shivering.

The woman noticed the dog and stopped in front of it.

She never expected that the footage of her kind act to the stray dog would be posted online. It captures the hearts of many and making headlines across the country.

“Humanity is not dead,” heralded one news outlet.

She takes off her scarf and covers the stray dog.

As the footage went viral, someone recognized the lady as one of their friends named Duygu Elma. Thinking that she just need to do the right thing, Elma never expected to garner that much attention from gifting the stray dog her scarf.

“I couldn’t imagine that my actions would receive this attention. I’m very surprised about it. The weather was so cold. I just couldn’t take it when I saw him shivering.” told Elma to The Dodo.

Elma wasn’t expecting any attention to her act.

Watch the moment Elma takes off her scarf and covers the stray dog here:

Elma has definitely set a good example to all of us to help the vulnerable.