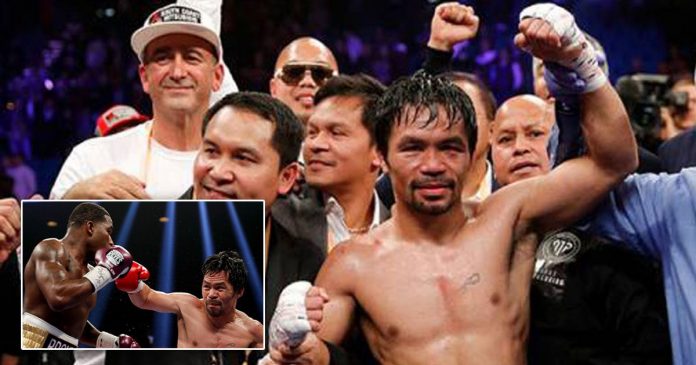 He appeared for the first time since 2016 at the MGM Grand Garden Arena where he made his American debut 18 years ago.

In spite of turning 40 last month, Pacquiao proved that he is still fast and skilled as he showed confident moves against American Broner, 29.

“I feel so happy because I did my best in the fight and in training. Thank God for this victory,” Pacquiao told ESPN.

“I’m so happy because God gave me this good health. At the age of 40, I can still give my best. Although I wanted to be more aggressive, my camp told me don’t be careless and to counter him and wait for opportunities,” he said.

Thank you Lord for the victory! Thank you to my wife Jinkee, my family, friends and fans from all over the world. Thank you to everyone who watched my fight tonight. Thank you for all your support. I wouldn’t be where I am today without all of you. May God bless you all pic.twitter.com/7fmbVXaiJA

Pacquiao defeated Lucas Matthysse in July last year by dominant seventh-round knockout, That was his first KO win in nine years. The victory led to his return to the United States to face Adrien Broner after two years.

“I proved in my last fight against Matthysse, and now I proved it again,” Pacquiao said.

“The Manny Pacquiao journey will still continue. I wanted to push more, but my trainer said don’t be careless. Wait for him, counter, and that’s what I did.”

Pacquiao has challenged Floyd Mayweather for a rematch after their 2015 clash where Mayweather won on points. The rematch is yet to be confirmed.