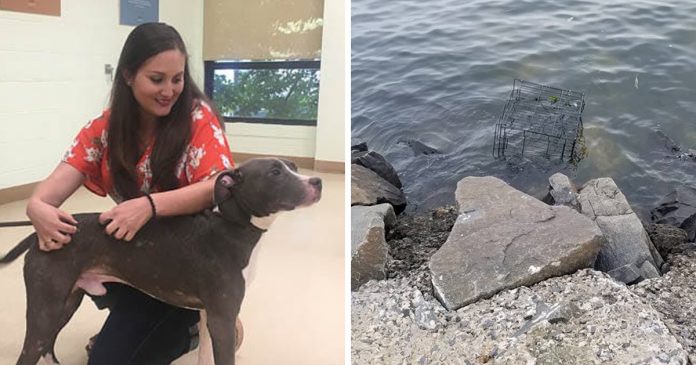 It’s hard enough to be apart from our favorite animal companion, what’s more doing something cruel than we can imagine to them. However, a woman called Jennifer Vaz from New Jersey stumbled upon a pit bull left to drown in a river!

Even more shocking, the pit bull was actually put inside a cage before thrown in the water. Fortunately, Vaz saw the pit bull at the right time and saved the poor dog.

Vas who was walking her dog, Molly along the banks of Sandy Hook Bay while enjoying the sunset at that time, was shocked upon seeing the one-year-old pit bull stuck and struggling for its life.

Luckily, she saw the dog in the river.

“Molly was noticing something and wanted to take me off the trail. When I looked down in the water, I saw River and I saw his little black eyes looking back at me,” told Vaz to CBS News.

Realizing that the pooch didn’t have long before the water completely submerged it, Vas quickly climbed down the embankment to pull the caged pit bull.

Vaz with the dog.

“When I looked over and saw him in the crate, and the water splashing off him, his eyes were so sad. I’ll never forget his eyes. He wasn’t angry, he just seemed to want to know why. What’s going on? Why is this happening?”

Named the dog as River, Vaz brought the pooch to local authorities and get it checked.

They thanked Vaz for her heroic act as the dog would have now be gone without her determined help.

However, the lady insisted that the credit should go to her dog, Molly.

River was now living in a loving foster home and been doing well ever since.

As for River’s abuser, 34-year-old Aaron D. Davis turned himself into authorities after a search warrant was issued for his arrest. According to prosecutors, Davis had attempted to drown his girlfriend’s dog as retaliation for an argument the pair had.

We are so relieved that Molly and Vaz passed by on that fateful day and came to River’s rescue!