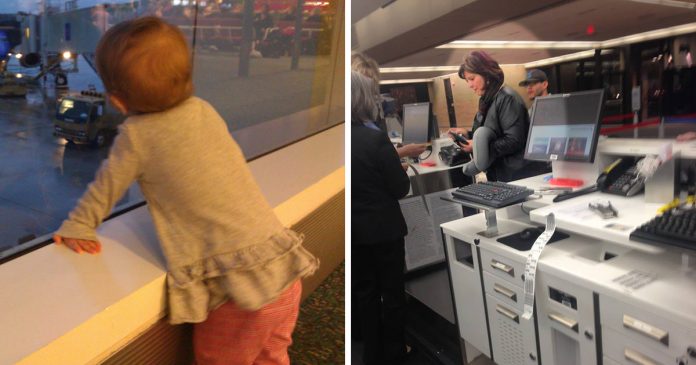 The lap infant system on airlines in the United States dictates that children under the age of 2 don’t need their own paid-for ticket to fly, making it affordable for families with young children to travel. Once a child turns 2, though, they need a ticket of their own.

A poor dad from Omaha, Nebraska was stressed out when he was told by the desk attendant to purchase a flight ticket for her two-year-old girl.

His daughter was still a one-year-old when he purchased a single plane ticket for himself and his daughter on January.

Yet, by the time their trip rolled around, his daughter had just turned two. So, when they arrived at the ticket counter to check in for the flight, the desk attendant had some unfortunate news for them: now that the young girl had turned two, she would need a ticket of her own.

The poor dad seemed near tears when a woman approached him and, after quietly discussing his situation, stepped up to the ticket counter.

A fellow flight passenger, Kevin Leslie, overheard the exchange and later relayed it on a Facebook post:

She pointed back at his daughter and said, ‘I wanna buy her ticket.’

The agent said, ‘You know how much this ticket costs right?’

It would have been expensive, even at the time of the ticket purchases, but it was even worse just moments from boarding at the gate. Frantic, the father wracked his brain, trying to figure out where he’d get the $749 needed to make sure they would be able to board their flight.

It was later discovered that the woman’s name is Debbie Bolton, who serves as co-founder and global chief sales officer at Norwex, a company that makes reusable microfiber cleaning cloths.

Her employees were quick to praise her as the kind of person who does this whenever she can.

“We need more Debbie Boltons in this world,” one of them said.